Democratic voters appear to be losing interest in House Democrats’ ongoing impeachment inquiry into President Trump, according to a new Hill-HarrisX poll released on Monday.

The number of Democratic voters who say they are paying close attention to the impeachment inquiry fell 5 percentage points to 73 percent in the latest nationwide survey. 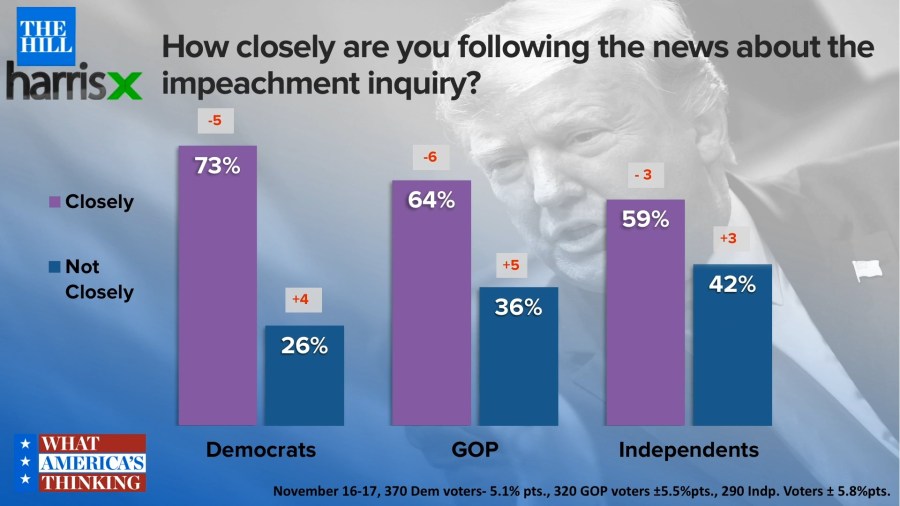 After holding steady at 70 percent in the past two surveys, the overall number of voters who said they are following the probe fell for the first time to 65 percent.

Unlike the prior surveys, the latest one was taken after Democrats held their first public hearing as part of their months-long impeachment inquiry. State Department officials William Taylor and George Kent kicked off the first round of televised hearings earlier this month.

Since then a number of former and current administration officials have testified on Trump’s dealings with Ukraine and whether he pressured the country into launching politically-motivated investigations into his political rivals.

Gordon Sondland’s testimony in particular marked a turning point after the U.S. Ambassador to the European Union testified that Trump explicitly sought a “quid pro quo” with Ukraine, conditioning a White House visit for politically-motivated investigations into Democrats.

Despite a lack of testimony from multiple potential key witnesses, House Intelligence Committee Chairman Adam Schiff (D-Calif.) told CNN’s “State of the Union” on Sunday that the panel plans to move forward with its upcoming impeachment report.

The House’s move to hold an impeachment vote seems inevitable at this point, though articles of impeachment are unlikely to pass in the Senate. The Senate does, however, plan to hold a full impeachment trial. Senate Republicans, including Sen. John Cornyn (R-Texas), have stated that any motion for an early dismissal of impeachment charges won’t likely have the votes to pass.

The Hill-HarrisX poll surveyed 1,000 registered voters from Nov. 17-18 and has a margin of error of 3.1 percentage points. Sampling error among partisan voters is higher.

10 hours ago
Rising
3 days ago