The survey released on Monday found that support for the former mayor ticked up from 3 percent to 6 percent among likely Democratic voters and Democratic-leaning independents. 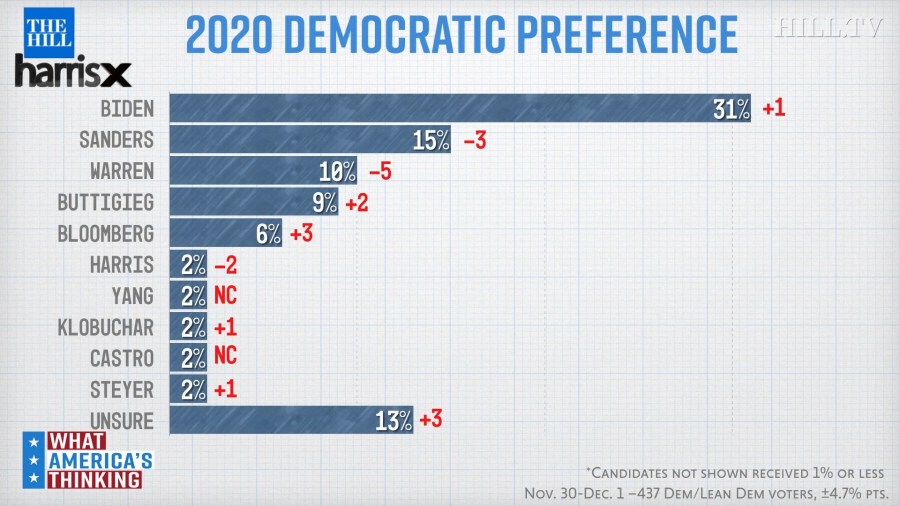 This marks the first Hill-HarrisX poll that has been taken since Bloomberg officially jumped into the 2020 race, though he was included as a possible candidate in a previous survey.

Buttigieg, who gained momentum in recent weeks, received 9 percent support, a two-point increase from the prior Nov. 16-Nov. 17 poll.

The rest of the contenders in the crowded Democratic field received 1 percent in support or less. Another 3 percent said they were unsure.

The survey comes in light of an ever-fluid Democratic primary race.

Though the field recently expanded with the addition of Bloomberg and billionaire Tom Steyer, the primary also lost two candidates over the last few days.

Sestak announced the news in a press release over the weekend, saying he was thankful for what he called an “endeavor filled with immeasurable wisdom, passions, humor and insights to, and from, the people of America.”

A day later, Bullock issued a statement announcing his own departure from the 2020 race.

“While the concerns that propelled me to enter in the first place have not changed, I leave this race filled with gratitude and optimism, inspired and energized by the good people I’ve had the privilege of meeting over the course of the campaign,” he wrote.

The Hill-HarrisX poll surveyed 1,001 registered voters between Nov. 1-Dec. 1. It has a margin of error of plus or minus 3.1 percentage points.