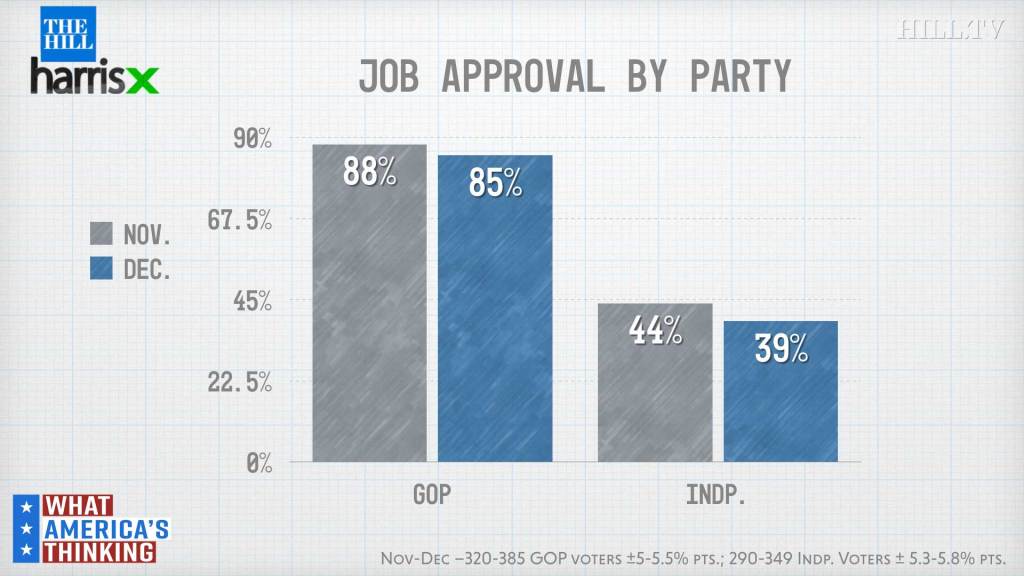 The new approval rating among independent voters is down from 44 percent in early November.

The survey comes amid the release of articles of impeachment against Trump.

House Democrats on Tuesday unveiled two articles of impeachment that said the president had abused his power and obstructed Congress during the impeachment inquiry.

Speaker Nancy Pelosi (D-Calif.), who had previously rejected impeachment calls, said Trump’s dealings with Ukraine had left the party with no other alternative.

“On this solemn day, I recall that the first order of business for members of Congress is the solemn act to take an oath to defend the Constitution,” Pelosi said while announcing the articles.

The historic move comes after a months-long inquiry that was sparked by a whistleblower’s complaint alleging that Trump had tried to pressure Ukraine into opening investigations into his political rivals.

Trump, meanwhile, has denied any wrongdoing, tweeting “WITCHHUNT” following the unveiling of the impeachment articles.

HarrisX surveyed 1,000 registered voters across the country between Dec. 8 and 9. The sampling margin of error is plus or minus 3.1 percentage points.

17 hours ago
Rising
4 days ago