Bloomberg rises to third place alongside Warren in national poll

The nationwide poll, which was released Friday, shows Bloomberg up from 5 percent to 11 percent support for the nomination nationally. The former New York City mayor is now in a dead heat for third place with top-tier candidate, Sen. Elizabeth Warren (D-Mass.), who also received 11 percent support. 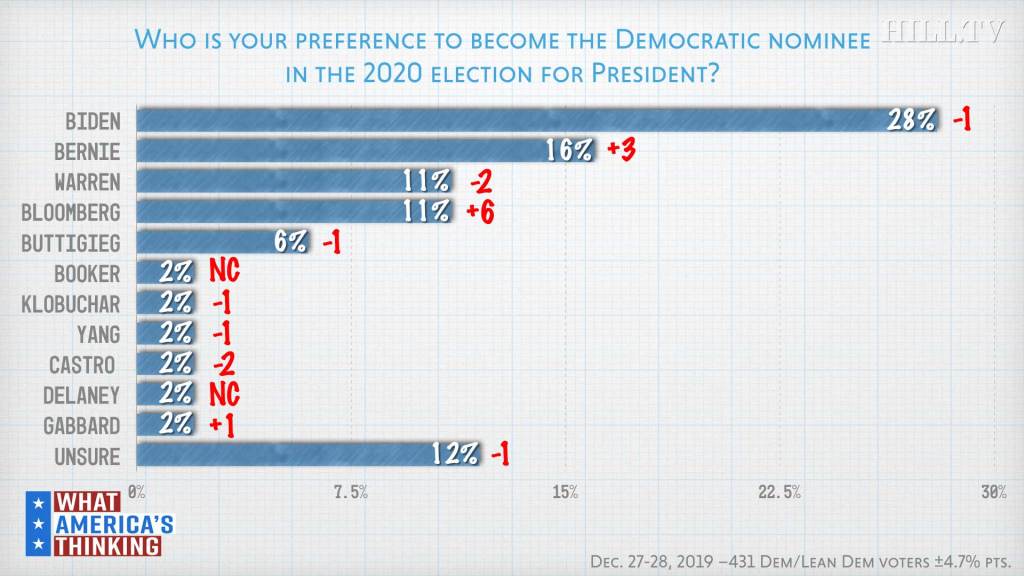 Former South Bend, Ind., Mayor Pete Buttigieg saw a slight increase after slipping 4 percentage points in mid-December. In the latest survey, he now has 6 percent support, up from 5 percent from the Dec. 13-14 poll.

Bloomberg’s rise in the latest Hill-HarrisX survey comes in spite of his late entry into the 2020 race and the fact that he hasn’t appeared in any of the Democratic primary debates.

Bloomberg has chosen an unorthodox campaign strategy, making the decision not to raise money and instead deciding to fund his own campaign. This has disqualified him from taking the debate stage under rules from the Democratic National Convention.

However, prior to announcing his bid in November, Bloomberg launched an ad buy totaling roughly $19.4 million over 90 local markets across the country. After making his campaign official, he also rolled out a 60-second spot as part of his $31.5 million media blitz.

Bloomberg’s multimillion-dollar ad expenditure has made him a prime target for his fellow rivals.

After the multimillion-dollar rollout, Warren accused the former New York City mayor of trying to buy the November election.

Warren, meanwhile, appears to be losing some momentum after challenging Biden’s front-runner status as recently as October.

The RealClearAverage of Iowa polls shows her in fourth place at 16 percent support behind Biden’s 19 percent. Buttigieg continues to lead in the early primary state with 22 percent, with Sanders trailing at 20 percent.

Warren was also surpassed by her top three rivals in the primary race in terms of fundraising.

The Warren campaign announced Thursday that it had raised $21.2 million, compared to Biden’s $22.7 million haul and Sanders’s $34.5 million.

The Hill-HarrisX survey polled 1,004 respondents, 431 of whom identify as Democrats or left-leaning Independents, between Dec. 27 and 28. It has a margin of error of plus or minus 3.1 percentage points.