President Trump’s approval rating has hit a record high among his supporters in the latest Hill-HarrisX poll released on Monday.

Of those surveyed, 90 percent of Republicans said they approve of Trump’s job performance, compared to just 10 percent who did not have a favorable view of the president. That is the highest favorable rating among Republicans in the Hill-HarrisX poll since it began asking the question in 2018. 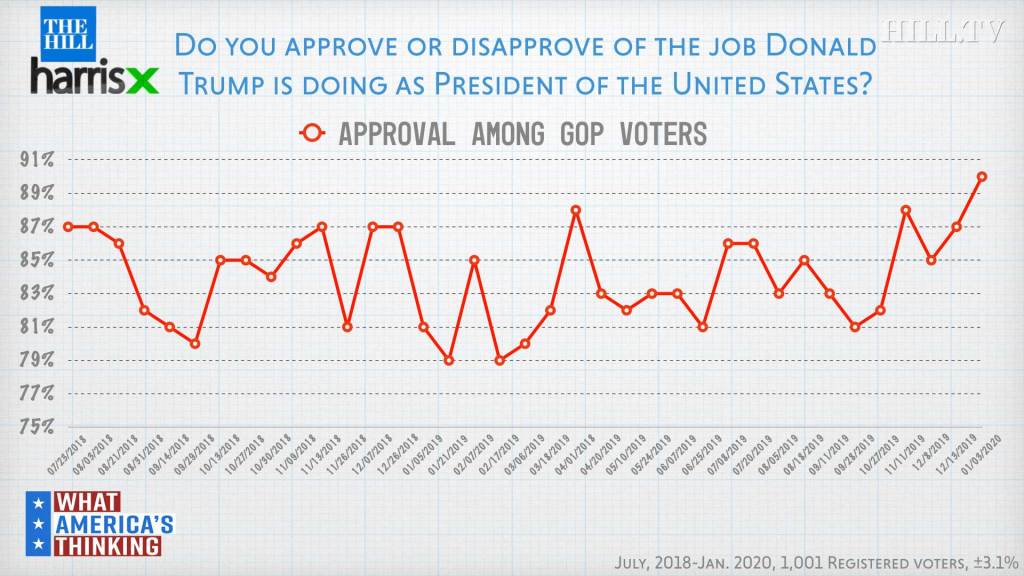 Forty percent of independents, meanwhile, said they approved of Trump, compared to 16 percent of Democrats.

Overall, Trump’s approval dipped 2 points from the previous December poll to 47 percent, while his disapproval rating ticked up to 53 percent.

The survey comes as lawmakers in Washington return to Capitol Hill this week to face dueling crises: Trump’s ordering of an air strike that killed a top Iranian official and his impending impeachment trial in the Senate.

In reaction to the strike killing Gen. Qassem Soleimani in Baghdad, Iran announced that it was officially ending its commitment to the 2015 nuclear deal. Though Trump had pulled the U.S. out of the Obama-era deal in 2018, Europe has been trying to keep the terms the deal, which includes curtailing Iran’s nuclear program in exchange for sanctions relief.

Iraq’s parliament, meanwhile, voted on Sunday to expel American and foreign troops from the country, a decision Secretary of State Mike Pompeo said the U.S. would not heed.

Trump is also facing an impeachment trial in the Senate that is expected to take place some time this month.

The House voted almost exclusively along party lines last month to impeach Trump on abuse of power and obstruction of Congress.

However, Speaker Nancy Pelosi (D-Calif.) decided to withhold the two articles of impeachment against Trump as a way to pressure Senate Majority Leader Mitch McConnell (R-Ky.) to concede to their demands of calling in witnesses.

The Hill-HarrisX surveyed 320 Republicans, 370 Democrats and 290 independents across the country. The poll, which was conducted between Jan. 3 and 4, has a margin of error of plus or 3.1 percentage points.