Sen. Bernie Sanders’s (I-Vt.) support has climbed to its highest level in nearly five months, according to a new Hill-HarrisX poll of the Democratic presidential primary race.

The nationwide survey released Tuesday showed that 19 percent of respondents support Sanders, which makes him just one point shy of his previous high of 20 percent in the August 16 poll. 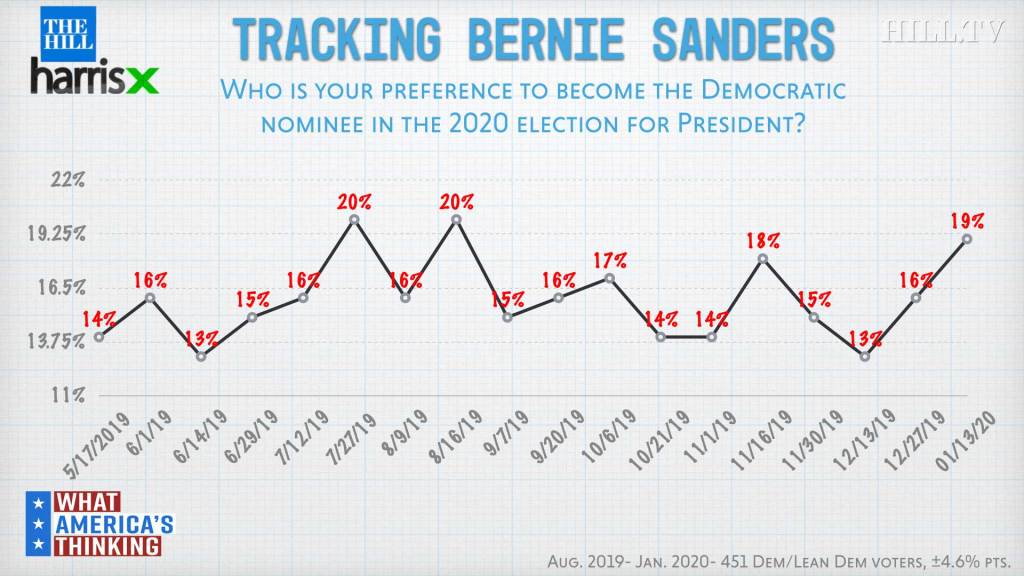 Sen. Amy Klobuchar (D-Minn.) and billionaire Tom Steyer each received three percent support. The rest of the candidates in the crowded Democratic field polled at 2 percent or less.

The survey is likely welcome news for the Sanders campaign ahead of the Iowa caucuses.

Sanders and his aides have repeatedly gone after Biden for his past positions on racial issues and his vote in favor of the Iraq War.

Jeff Weaver, a senior adviser to the Sanders campaign, issued a statement over the weekend, saying he found it “appalling” that the former vice president “still refuses to admit he was dead wrong on the Iraq War.”

Sanders’s campaign has also engaged in a dust-up with the Massachusetts senator’s campaign, reportedly telling prospective voters that the candidate is a weak election choice because she only appeals to white educated liberals.

The back-and-forth eventually culminated with Warren’s claim that Sanders had told her during a 2018 meeting that a woman could not win a general election race against President Trump.

Both feuds could come to a head in Tuesday night’s Democratic primary debate.

Sanders is among the six candidates set to take the stage in Iowa. The event marks the last debate before the Hawkeye State holds its caucus on Feb. 3.

The Hill-HarrisX survey was conducted among 451 Democratic voters and Democratic-leaning independents. It has a margin of error of plus or minus 4.5 percentage points.