A majority of voters in a nationwide poll released Monday say they vote for a candidate rather than their political party.

Sixty-seven of respondents in the Hill-HarrisX survey said they would prefer to vote for a candidate, regardless of their political affiliation. A third of respondents — 33 percent — favor voting strictly by party. 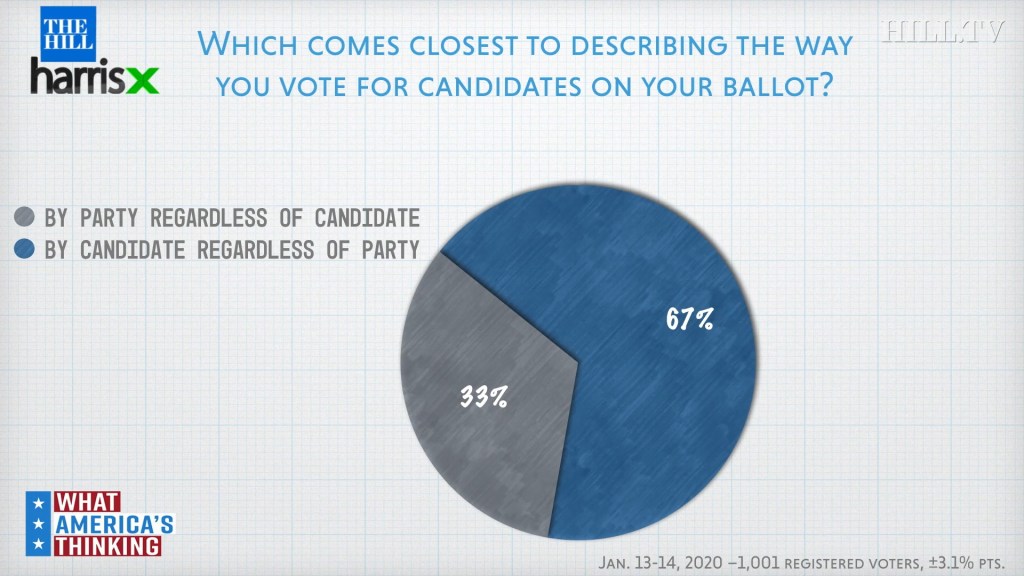 Independents, meanwhile, understandably factor in the candidate over political party, with 85 percent saying they would cast their ballot based on the nominee rather than the political party.

The responses come even though voters have been increasingly voting for the same party over the past decade.

The Washington Post reported that the 2016 presidential election saw the highest percentage of straight-ticket voters in more than a century. All 34 states with Senate races voted for the same party for the upper chamber as for president.

The 2018 midterm elections also saw an increase in straight-ticket voting.

According to polling website FiveThirtyEight, the difference between the margins in a state’s gubernatorial and Senate races shrunk 10 points during the last election cycle, pointing to a decline in the number of split-ticket voters. That finding was the smallest median difference of any midterm dating back to at least 1990.

This trend comes amid a heightened sense of partisanship on Capitol Hill on a number of issues, especially impeachment.

President Trump’s trial in the GOP-led Senate is expected to begin this week and his party remains largely in lockstep behind him. While some Democrats broke with their party on the issue, every Republican in the House voted against the articles of impeachment that the Senate is set to consider, which include abuse of power and obstruction of Congress. Some Senate Republicans have expressed support for featuring trial witnesses, but none have signaled support for removing the president from office.

The Hill-HarrisX poll surveyed 1,001 registered voters between Jan. 13 and 14. There is a margin of error is 3.1 percentage points.