Overwhelming majority of voters say civility is needed in politics

An overwhelming majority of Americans say it’s important for politicians to treat each other with civility, according to a new Hill-HarrisX survey released Monday.

Ninety percent of respondents nationwide said that it’s important for politicians to be civil to one another, compared to just 10 percent who said they didn’t think it was important. 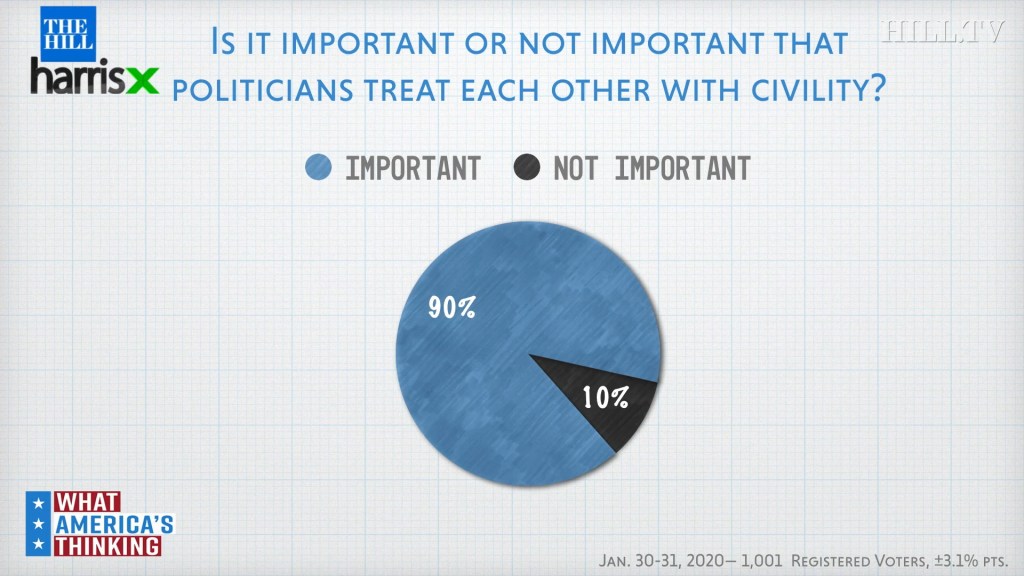 Voters across the political spectrum said civility was important to them. An equal share of Democrats and independents — 90 percent — were in agreement, as were 89 percent of Republicans.

Civility in politics has come under renewed scrutiny ever since President Trump took office in 2016.

The president in December faced bipartisan backlash for his comments about the late Rep. John Dingell (D-Mich.) at a campaign rally.

Trump suggested that Dingell might be “looking up” instead of looking down from heaven. The president also attacked Rep. Debbie Dingell (D-Mich.), the late lawmaker’s wife, for voting in favor of impeachment.

Trump previously faced backlash from Democrats and Republicans alike for repeatedly bashing the late Sen. John McCain (R-Ariz.). Following McCain’s death, Trump criticized him for his crucial vote against repealing ObamaCare and his handling of a dossier containing unsubstantiated allegations about Trump’s ties to Russia.

More recently, Democrats have also wrestled with the issue of civility.

Rep. Rashida Tlaib (D-Mich.) on Saturday vowed to do “better” after she was caught on video booing former Secretary of State Hillary Clinton at a campaign event for Sen. Bernie Sanders (I-Vt.).

Talaib, who has endorsed Sanders for president, later insisted she “will continue to strive to come from a place of love,” and called on Democrats to rally around whoever becomes the party’s nominee to challenge President Trump in November.

“This is about building a just and equitable future for my two boys, children across the country, and future generations,” she said.

The Hill-HarrisX survey was conducted online among 1,001 registered voters from Jan. 30-31. The margin or error is plus or minus 3.1 percentage points.

6 hours ago
Rising
3 days ago