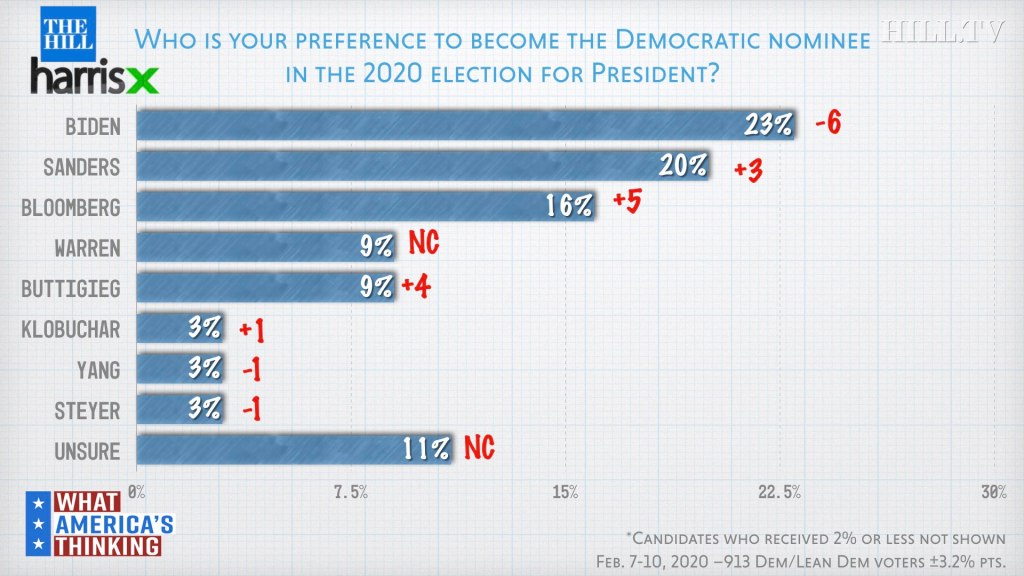 All other candidates received 2 percent or less and 11 percent of voters are still undecided.

Despite his recent drop in the polls, experts have noted Biden’s strong support among African Americans and older voters, a factor that might keep him at the top of the leaderboard nationally, if support holds.

“Biden’s strength with African Americans and older voters is keeping him at the top of the polls, though Sanders base is loyal,” Molly Murphy, Democratic pollster and Partner of ALG Research told The Hill.

“What is interesting is that in the last 10 or so days, Mike Bloomberg is beginning to surge, outperforming Buttigieg on the heels of his Iowa win, and only slightly behind Sanders and Biden,” she added.

Sanders and Bloomberg have gained ground in other nation-wide surveys, including recent Quinnipiac University and Monmouth University polls.

The candidates face off tonight in New Hampshire in the first primary election of the season, where Sanders has been leading in recent surveys.

The Hill-HarrisX poll was conducted online among 913 registered Democratic and Democratic-leaning Independent voters between Feb. 7 and 10. It has a margin of error of plus or minus 3.2 percentage points.