Sen. Bernie Sanders (I-Vt.) leads for the first time in a new Hill/HarrisX poll of the Democratic presidential race, just days before the next nominating contest in Nevada.

Sanders and Bloomberg have both risen 2 points in the poll since earlier this month, while Biden has ticked down 4 points. All three candidates are within the poll’s margin of error. 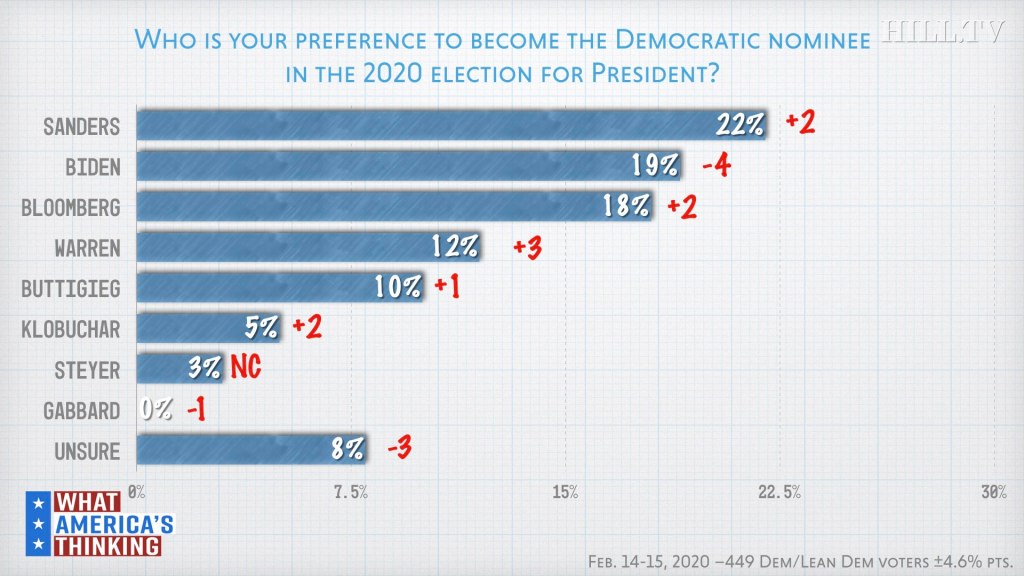 Warren, who gained 3 points compared to a poll earlier this month, stands at 12 percent support, while Buttigieg gained 1 point and is at 10 percent.

The survey indicates that the Democratic White House race remains fluid, with 8 percent of Democratic and Democratic-leaning independent voters saying they are unsure who they support.

“Nationally, the Democratic contest is increasingly starting to look like a three way race between Sanders, Biden and Bloomberg. Bloomberg has been growing steadily and is within striking range of both other candidates among Democrats and Democratic leaning independents,” Dritan Nesho, Founder and CEO of HarrisX, told The Hill.

“Bloomberg’s first debate performance, and Biden’s overall showing, in the Nevada primary will determine the future dynamic of the race,” he added.

Six top Democratic contenders are set to face off in the party’s 9th presidential debate on Wednesday night in Nevada as the candidates compete ahead of the state’s caucuses on Saturday.

Sanders is entering the debate as a clear frontrunner in polls, while the Las Vegas debate will also feature Bloomberg on stage with other candidates for the first time.

“Sanders has positioned himself as the leader in the Democratic sweepstakes by attracting 54% of the potential Democratic electorate under 45 years of age, and 46% who consider themselves as progressives,” Lee Miringoff, director of the Marist Poll, told The Hill.

“For these, reasons, Sanders is the front-runner going into the debate,” he added.

The Hill-HarrisX poll was conducted online among 449 registered Democratic and Democratic-leaning independent voters between Feb. 14 and 15. It has a margin of error of plus or minus 4.6 percentage points.