Americans’ faith in Wall Street never recovered from the 2008 crisis

Although the U.S. economy has grown at a steady clip since 2014, the financial crisis that sparked the 2008 recession seems to have permanently altered Americans’ opinions about banks and the stock market. Even as the public has grown more confident about the state of the economy, Americans have remained skeptical of the country’s financial institutions.

“The financial crisis had a searing impact on public opinion,” Karlyn Bowman, a senior fellow at the American Enterprise Institute said Tuesday on “What America’s Thinking,” Hill.TV’s show about polling and public opinion. “People thought our financial system was going to collapse and they’re not that confident that it’s secure today.” 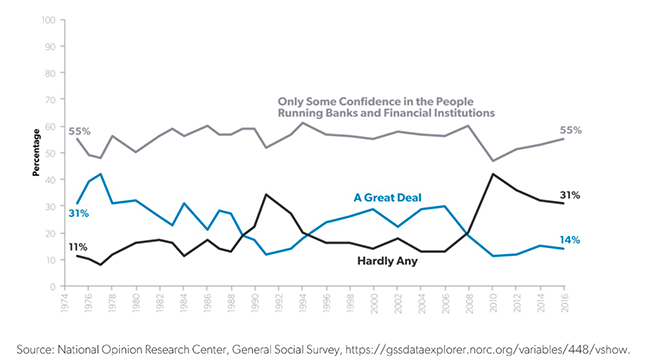 Bowman noted that in a report that examined surveys of the confidence in the economy, a General Social Survey study found that 31 percent of Americans had “hardly any” confidence in the leaders of banks and financial institutions.

Only 14 percent of GSS respondents said they had “a great deal” of confidence in them, up only three points from 2010 when 11 percent of Americans said that.

The 2008 crisis also triggered a long-term shift in public opinion about “Wall Street” as a proxy for America’s larger financial industry. Even as the 2008 recession fades into history, the public seems to have remained more skeptical. According to Harris Poll data cited by Bowman, 48 percent of Americans say they have “hardly any confidence” in Wall Street leaders. Just 7 percent said they had a “great deal.”

By contrast, confidence in the economy as a whole has increased markedly by contrast. A May Gallup survey found that 67 percent of Americans said that it was a “good time” to find a quality job.

“People are still confident in their own bank, the bank that they bank at. But Wall Street, banks in general, have barely recovered since the 2008 crash,” Bowman said.