President Trump performed a hostile takeover of the Republican Party in 2016 but as he prepares for his 2020 reelection bid, a new poll shows that GOP voters would overwhelmingly support him against several intraparty rivals.

The president would also have no trouble beating Arizona Sen. Jeff Flake, a long-time critic with whom he has clashed repeatedly. In a hypothetical two-way matchup, of those surveyed, just 9 percent of Republican voters supported Flake while 70 percent backed Trump in the poll.

Among independent voters (who are allowed to vote in party primaries in many states, including the first in New Hampshire), Kasich presents a more stiff challenge to Trump.

While Kasich’s potential bid might have some currency among independents, ultimately, it is Republican voters who will determine Trump’s future within the party, said Dritan Nesho, CEO of HarrisX, the company that conducted the survey.

“Even though independents and Democrats might have slightly different preferences, that doesn’t matter. Ultimately it’s registered Republicans that will decide that question,” Nesho said during Tuesday’s broadcast of “What America’s Thinking.”

“Frankly, it’s his party,” Nesho said. “By a factor of two-to-one, almost half of Republicans associate with Trump over the party.”

No current or former Republican officials have announced a primary challenge to the president, but several remaining anti-Trump politicians have urged others to make a go of it.

During a Sunday interview with CNN, Flake said that he would be unlikely to mount a challenge to Trump.

“I think the future of the party is with people with an optimistic vision moving ahead. I don’t think that will be me. I think there are better candidates out there. But somebody needs to run,” he told host Jake Tapper.

Flake will be departing from the Senate at the end of the year. He declined to run for reelection after several polls of Arizonans found that his anti-Trump image made him unpopular among Republicans. In July, a Morning Consult survey found that Flake was the second-least popular senator in his or her own state. 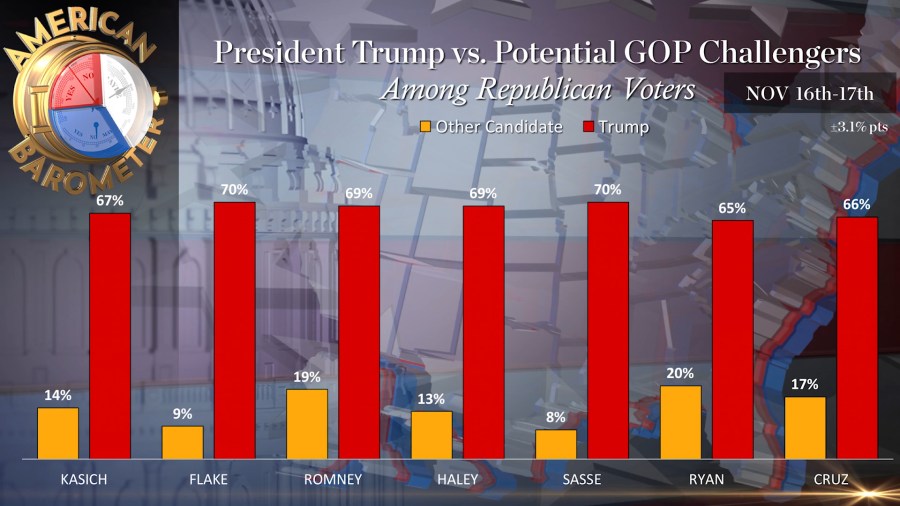 In the latest American Barometer survey, Flake was the second-least popular potential GOP challenger among Republican respondents. Nebraska Sen. Ben Sasse, who is not well-known nationally, was supported by only 8 percent of Republican voters.

The two GOP politicians who received the most support were outgoing Speaker of the House Paul Ryan (R-Wis.) and former 2012 GOP presidential nominee Mitt Romney, who were supported by 20 percent and 19 percent of Republican respondents, respectively.