President Trump’s public support appears to be holding steady despite the partial government shutdown dragging on amid a stalemate over his demand for border wall funding. 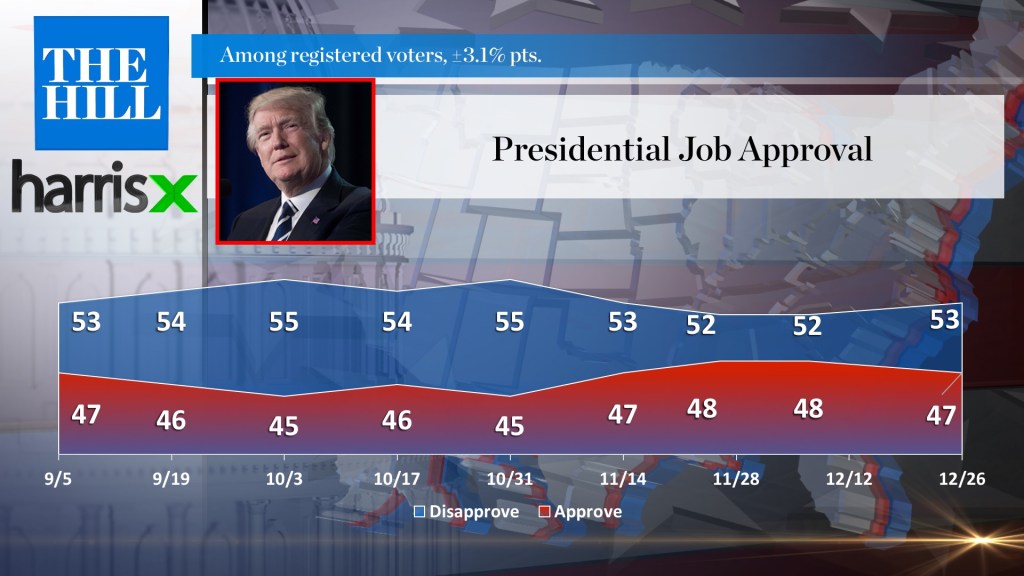 In a poll released Friday by The Hill and HarrisX, the president’s job approval rating stands at 47 percent, down 1 point from the previous survey Dec. 7-8 and within both studies’ 3.1 percent margin of error.

Trump’s approval rating in the Hill-HarrisX polls has been relatively steady since September, remaining between 45 percent and 48 percent.

“Despite a couple of polls being a little bit outside or perhaps a little bit of outliers, we’ve seen the president’s approval rating generally consistent and in the low- to mid-forties,” Mallory Newall, research director at Ipsos Public Affairs, said Friday during a panel discussion featured on Hill.TV’s “What America’s Thinking.”

While Trump’s numbers have stayed relatively steady during his presidency, he has consistently received more very negative assessments in surveys than very positive ones.

That dynamic is a “warning sign,” Republican pollster Ed Goeas said in the discussion Friday.

“There’s real intensity on the strong negatives versus the strong positives. That is not a good sign for the president in terms of going forward.”

It may be particularly difficult for Trump, Goeas argued, as he was able to win in 2016 despite being unpopular because his former Democratic rival Hillary Clinton was “equally disliked.”

A poll conducted among over 115,000 mid-term voters by the University of Chicago’s NORC research operation for The Associated Press and Fox News Channel found that 16 percent of people who said they “somewhat” approved of Trump cast ballots for Democrats in November.

The latest Hill-HarrisX survey was conducted Dec. 26 and 27 and is part of a series of polls that are released daily about politics and public policy.