Americans are unsure of where the economy is headed in 2019

Americans are unsure of how the national economy will perform in the new year as some economic and financial experts predict a slowdown in economic growth.

In a new The Hill-HarrisX poll of registered voters, respondents split their opinions across several different choices when asked to predict how they see the economy performing in 2019. 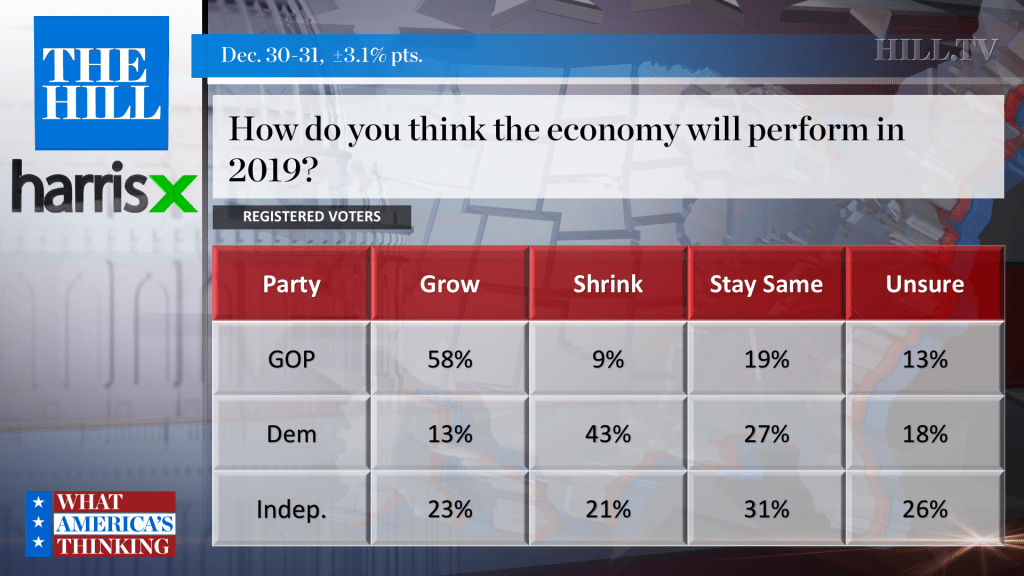 Partisanship appears to be playing a role in how people perceive the economy’s near-term future.

A majority of Republican respondents, or 58 percent, said the economy will improve in 2019.

Democrats were more inclined to think the economy will worsen, although less than a majority, or 43 percent, said they believed this.

“The way voters see it, it’s very partisan,” Pia Nargundkar, a Democratic pollster said Friday on “What America’s Thinking,” Hill.TV’s show about public opinion and the polling industry. “Whether people think it’s going to grow or or it’s going to stagnate, Republicans are far more confident because we have a Republican president, and Democrats are far more pessimistic because we have a Republican president.”

Americans viewed the economy through a partisan lens during the presidency of Barack Obama as well.

In a 2015 Pew Research Center survey of 2,000 adults, 33 percent of Republican respondents said they believed the economy was not recovering at all even though it had been expanding for several years up to that point.

Just 5 percent of Republican respondents polled at the time said the national economy was “recovering strongly” compared to 19 percent of Democratic respondents who said the same.

The Debrief
16 hours ago