President Trump has said that shutting down the federal government in support of his demand for a southern border wall is a “total winner” for him politically, but according to a new poll, the only people who oppose compromise on the issue are his strongest backers.

An overwhelmingly 70 percent of registered voters in the latest The Hill-HarrisX poll said they want Trump and Congress to reach some sort of compromise, compared to just 30 percent who say that sticking to principles is more important than ending the partial shutdown. 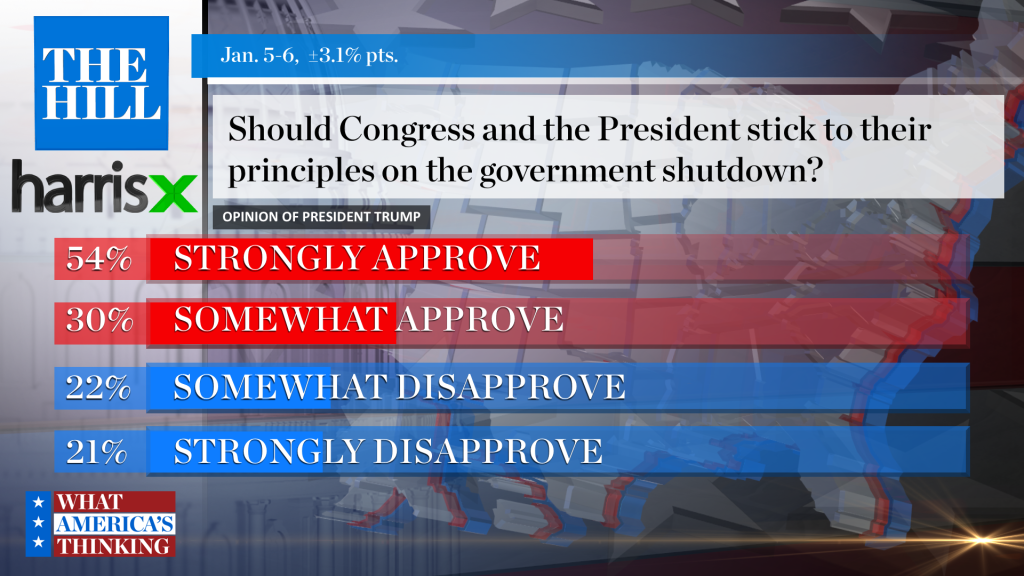 The poll found that while Trump’s most fervent supporters approve of refusing to bend, no other demographic group did. Even then, voters who said they “strongly approve” of Trump did so by only a slim margin of 54 percent to 46 percent.

Voters who only somewhat approve of Trump were strongly in favor of compromise with 70 percent saying they wanted to see an accord reached while only 30 percent said they wanted policymakers to stick to principles.

That only Trump’s most fervent backers reject compromise may be politically problematic for the president since only 21 percent of voters said they strongly approve of him.

People who somewhat disapproved of Trump favored a deal by a 78 percent to 22 margin, while those who strongly disapprove of the president said they wanted compromise 79 percent to 21 percent.

Parts of the federal government saw their funding lapse last month when Trump said he would refuse to sign spending bills that didn’t include funding for the long-sought border wall. Negotiations with congressional leaders are ongoing, but have reportedly seen little progress.

In September, Trump tentatively supported a deal with congressional Democrats that would have granted formal legal protections to some unauthorized immigrants enrolled in the Deferred Action for Childhood Arrivals program in exchange for a border wall but later balked at that under conservative criticism, leading some Democrats to call him an unreliable negotiator.

However the stand-off is resolved, both sides are likely to claim victory.

“What in the world is a wall?” political analyst Bill Schneider said Monday on “What America’s Thinking,” Hill.TV’s online show about polling and public opinion. “Is it a fence, is it slats, he’s talking about steel slats. He’ll call it a wall and he’ll say it’s the equivalent of a wall. Democrats have been talking about using technology–some electronic monitoring system that would work, they say, better than a wall. So there’s going to be a big argument about when is a wall not a wall.”

The latest Hill-HarrisX survey was conducted Jan. 5 through 6 and is part of an ongoing project of The Hill’s online TV division, Hill.TV, and the HarrisX polling company that asks 1,000 registered voters a day about issues of public policy and current events. The latest poll has a sampling margin of error of 3.1 percentage points.