Poll: A majority of Americans support raising the top tax rate to 70 percent

Rep. Alexandria Ocasio-Cortez (D-N.Y.) and her Republican critics have both called her proposal to dramatically increase America’s highest tax rate “radical” but a new poll released Tuesday indicates that a majority of Americans agrees with the idea.

In the latest The Hill-HarrisX survey — conducted Jan. 12 and 13 after the newly elected congresswoman called for the U.S. to raise its highest tax rate to 70 percent — a sizable majority of registered voters, 59 percent, supports the concept.

Ocasio-Cortez has not introduced any legislation to enact the concept but the survey shows a broad cross-section of Americans supports it, at least presently. 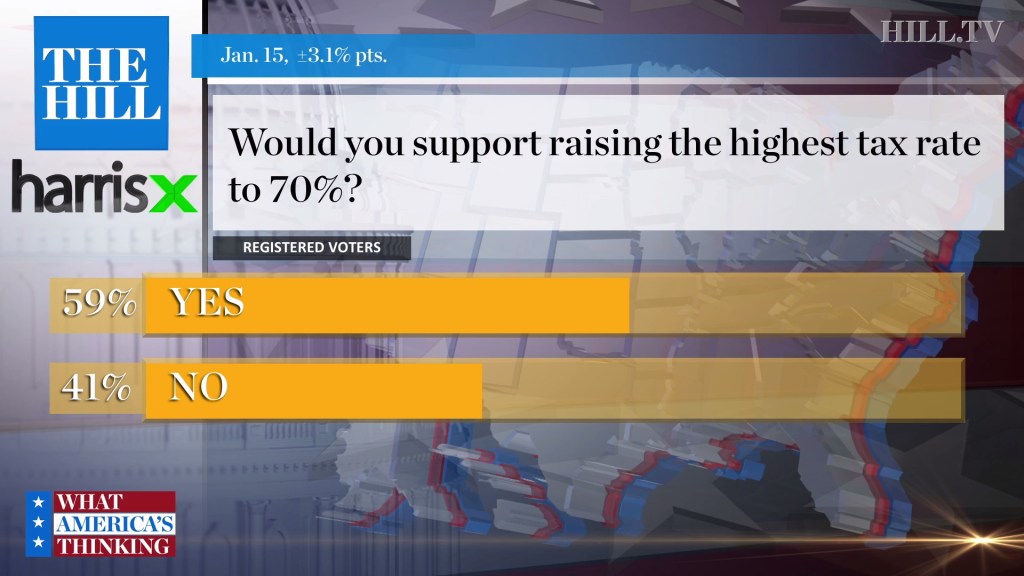 Increasing the highest tax bracket to 70 percent garners a surprising amount of support among Republican voters. In the Hill-HarrisX poll, 45 percent of GOP voters say they favor it while 55 percent are opposed to it.

Independent voters who were contacted backed the tax idea by a 60 to 40 percent margin while Democratic ones favored it, 71 percent to 29 percent.

Ocasio-Cortez is among a group of progressive legislators which includes Sen. Bernie Sanders (I-Vt.) who have called for increasing federal income tax rates on wealthier Americans. The New York Democrat kicked off a debate within her party in a Jan. 6 interview with “60 Minutes” during which she said she would support setting the highest tax, which she said would kick in at individuals 10 millionth dollar of income, at 70 percent.

In her comments to the CBS show, Ocasio-Cortez referenced tax rates that had once been in place during the mid-20th century. During the 1950s and 60s, the wealthiest Americans were once taxed at a rate in excess of 90 percent.

“That doesn’t mean all $10 million are taxed at an extremely high rate, but it means that as you climb up this ladder you should be contributing more,” she said.

The proposal has been met with both criticism and acceptance within the Democratic party. Republicans and conservative commentators have been universally critical, some incorrectly implying that the congresswoman wants to tax all income of the richest Americans at 70 percent.

The latest Hill-HarrisX poll was conducted online among a demographically representative sample of registered voters and has a sampling margin of error of 3.1 percentage points.