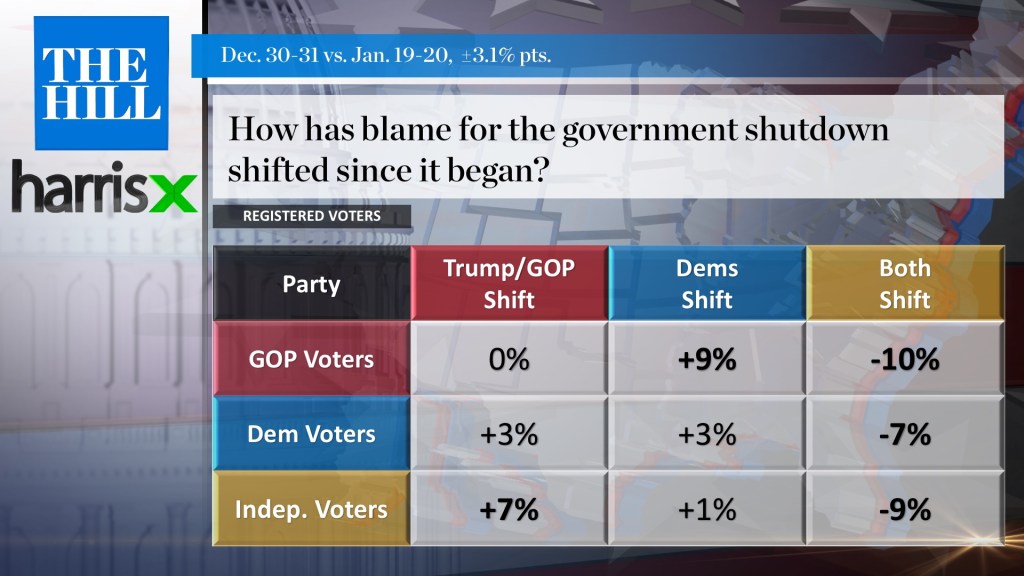 In the latest The Hill-HarrisX survey, 46 percent of registered voters who identify as political independents said that Trump and the congressional GOP are primarily responsible for the government closure, a 7-point jump from a Dec. 30-31 survey.

Just 17 percent of independents said that congressional Democrats were primarily responsible, up by just 1 percentage point from the earlier survey.

The poll also found that voters of both parties have increasingly moved toward blaming the opposing party for the budget standoff.

Republican voters are 9 percentage points more likely to blame congressional Democrats for the situation now in comparison to December.

Meanwhile, Democratic voters are even more likely to point the finger at President Trump: Eighty-one percent of Democratic voters say that Trump and the congressional GOP are to blame, up 3 points from the previous survey. 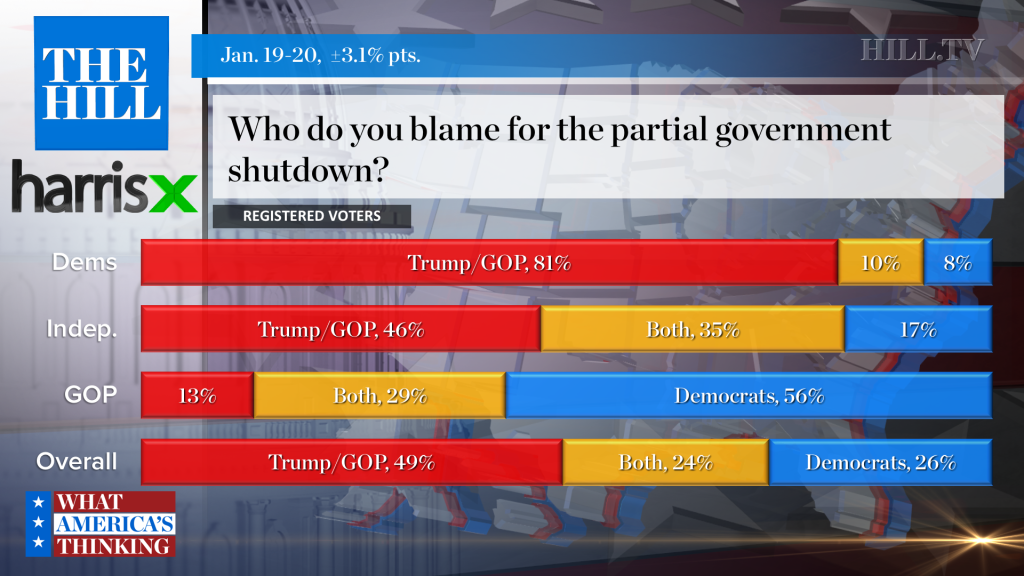 Notably, even as GOP voters’ willingness to blame Democrats has increased, only 56 percent of Republican voters say that congressional Democrats are responsible.

By comparison, 81 percent of Democratic voters say that Trump or the congressional GOP are at fault.

Thirteen percent of Republican respondents said that Trump and the congressional GOP were responsible, while 24 percent said that both parties were to blame.

Trump said last month during a public meeting with Democratic congressional leaders that he would be “proud to shut down the government for border security” and that he would refrain from blaming them for the shutdown, though he has subsequently sought to shift blame for the shutdown to Democrats.

Trump on Saturday proposed a three-year extension of protected status for Deferred Action for Childhood Arrivals (DACA) program recipients and some Temporary Protected Status holders in exchange for $5.7 billion for the border wall.

But Democrats quickly rejected the proposal to link border money to temporary protections for some undocumented immigrants.

“If you look at the wall in terms of [the president’s] broader immigration agenda, they’re just not that popular, so he’s sort of arguing from a fairly weak hand,” Dan Cox, a research fellow at the American Enterprise Institute said Tuesday on Hill.TV’s “What America’s Thinking.”

While most voters appear to disagree with his immigration positions, the minority of voters who do approve of President Trump are also more in favor of avoiding compromise on the shutdown.