A majority of Americans support increasing the federal minimum wage to $15 an hour, according to a poll released Thursday.

The latest Hill-HarrisX poll found that 55 percent of registered voters said they would support raising the the minimum wage to $15 per hour. Another 27 percent said it should be increased but to a lesser amount. 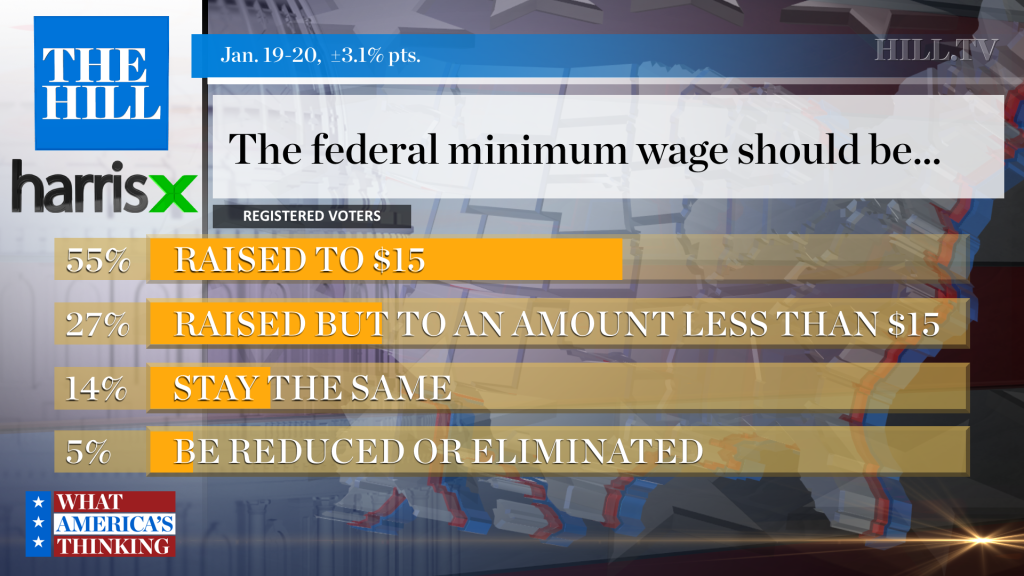 Fourteen percent of respondents said the minimum wage should be kept at $7.25, and 5 percent said that the wage floor should be reduced or eliminated.

Rep. Bobby Scott (D-Va.) and Sen. Bernie Sanders (I-Vt.) this month introduced legislation that would gradually increase the amount to $15 by 20204.

Democrats introduced similar legislation in previous sessions of Congress, but those measures often stalled due to widespread opposition from Republicans. This time around the legislation faces better prospects in the House, where Democrats are now in the majority.

Supporters of the Raise the Wage Act have argued that since the minimum wage is not indexed to inflation, millions of Americans who earn it end up living in poverty. Opponents argue that increasing the threshold would cause employers to reduce workers’ hours and lay off staff to defray costs.

It’s unclear where President Trump currently stands on the issue. During his 2016 campaign, he expressed conflicting viewpoints about the minimum wage, once saying that it should not exist at all and other times saying it should be increased.

The Hill-HarrisX survey found that 70 percent of Republican voters want a higher federal wage floor, with 36 percent supporting $15 per hour. Thirty percent of GOP respondents said they wanted to keep the amount the same, reduce it or eliminate it. A majority of both Democratic (73 percent) and independent voters (53 percent) support a $15 rate.

Minimum wage increases are broadly popular across all demographic groups. The $15 proposal was supported by a majority of all age groups in the Hill-HarrisX poll. Majorities from every region of the country supported it except in the Midwest, where 48 percent backed it and 32 percent wanted an increase of a smaller amount.

“Polling data shows that most Americans do want something higher than what we have right now,” Mallory Newall, research director at Ipsos Public Affairs, said Thursday on Hill.TV’s “What America’s Thinking.”

Support for a higher minimum wage also is strong across the ideological spectrum. Seventy-seven percent of self-described “strong liberals” supported an increase to $15, as did 66 percent of respondents who said they lean liberal. Sixty percent of moderates backed the proposal as well.

Among those who described themselves as strongly conservative or leaning conservative, support for increasing the wage to $15 did not reach majority levels; however, a majority wanted an increase to an amount above $7.25.

The Hill-HarrisX poll contacted a demographically representative sample of 1,000 registered voters, Jan. 19 and 20. The survey has a sampling margin of error of 3.1 percentage points.