A new poll is finding broad support for an annual wealth tax on people with assets of at least $50 million, underlining support for taxing the rich.

The poll showed support for the idea among people of all ages and races and from both political parties.

Sen. Elizabeth Warren (D-Mass.) proposed the wealth tax last month. She is one of several high-profile Democrats calling for higher taxes on the wealthy. 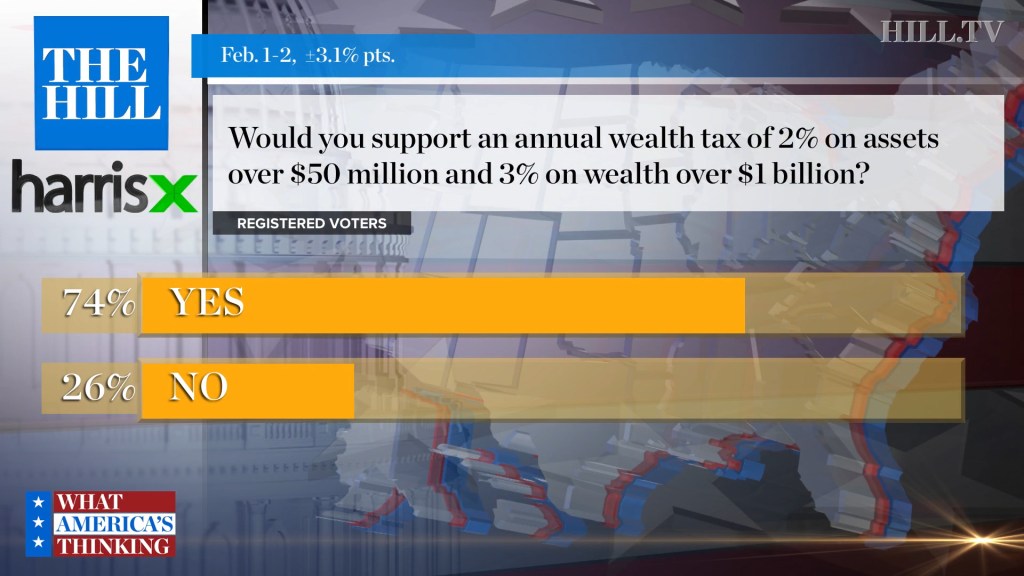 Just 26 percent of respondents said they were opposed to the wealth tax.

Strong majorities of both sexes said they favored the tax, as did a majority of Republicans. Sixty-five percent of GOP voters supported it while only 35 percent opposed it. Independents backed the tax 69 to 31 percent, as did 86 percent of Democratic voters.

The proposal also had strong support across all racial groups and in all regions of the country. Seventy-three percent of voters favored it in Western states, 72 percent backed it in the South, as did 73 percent in the Midwest, and 78 percent in the Northeast.

The survey was conducted Feb 1-2 among a statistically representative sample of 1,001 registered voters and has a sampling margin of error of 3.1 percentage points. Warren’s name was not mentioned in the context of the question.

A Jan. 22-23 Business Insider-SurveyMonkey poll found that 54 percent of adults favored Warren’s proposal while only 19 percent disagreed with it. Another 15 percent said they were unsure.

The policy idea attracted majority support in a Feb. 1-2 Morning Consult-Politico survey of registered voters. Sixty-one percent of respondents backed a wealth tax while only 20 percent were opposed. Nineteen percent were unsure.

While most Americans seem to support a wealth tax, Warren’s specific proposal has come under attack with some critics calling it unconstitutional and destructive. Michael Bloomerg, the former New York City mayor who is considering his own presidential bid, condemned it at a Jan. 29 speech in New Hampshire. 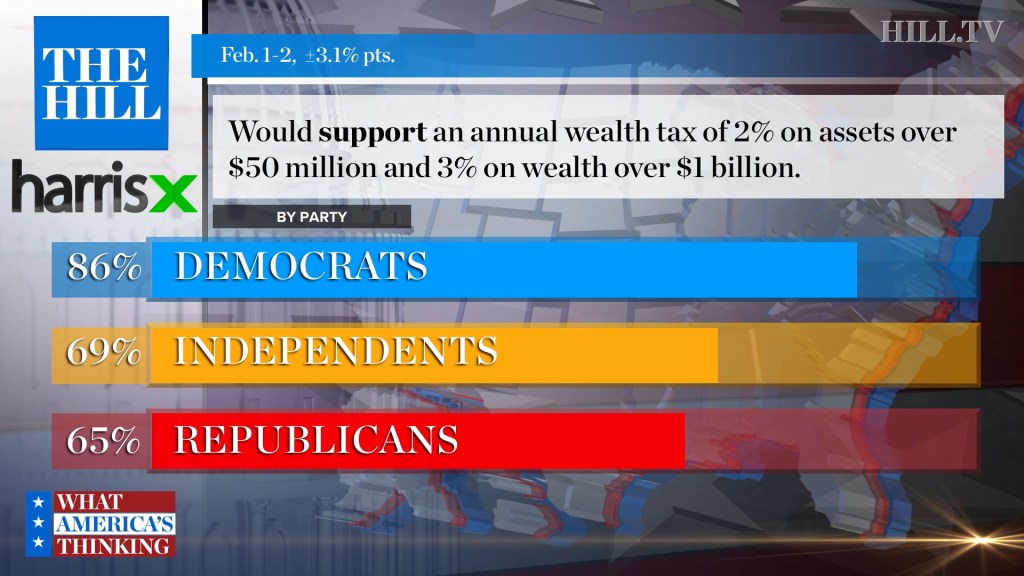 “We need a healthy economy, and we shouldn’t be embarrassed about our system,” Bloomberg said, arguing that a wealth tax would drive rich people to hide their incomes or withdraw their money from the economy.

Howard Schultz, the former CEO of Starbucks Coffee who is mulling an independent presidential campaign, has also criticized Warren’s idea as “ridiculous” and designed only to get media attention.

The proposal has also come under scrutiny from critics who argue taxing the wealth of people could be unconstitutional.

In a Jan. 29 tweet, Warren defended her idea. “We need structural change to get our economy and our democracy back on track — and no billionaire is going to get in my way of fighting for it,” she wrote.

Last week, Sen. Bernie Sanders proposed a tiered inheritance tax that would begin at 45 percent on estates worth more than $3.5 million and end at a 77 percent rate on estates valued in excess of $1 billion.

A Jan. 12-13 Hill-HarrisX survey found that 59 percent of voters supported Ocasio-Cortez’s idea and that even 45 percent of Republican voters backed it.

Increasing taxes on wealthy people has not been part of the national political discussion in recent decades but support for it has always been high among most Americans, according to Vanessa Williamson, a tax policy scholar at the Brookings Institution.

“The fact is that even though at the elite level of Washington, you hear just so much anti-tax rhetoric, rank-and-file Americans are actually very happy to tax the wealthy,” Williamson said on Tuesday’s broadcast of “What America’s Thinking,” Hill.TV’s show about public opinion and polling.