Michelle Obama would be tied with Biden as frontrunner if she ran in 2020, poll shows

Former first lady Michelle Obama tied with former Vice President Joe Biden as the top choice among Democratic voters when asked who should be the party’s nominee in 2020.

A Hill-HarrisX poll released Tuesday found that 25 percent of Democrats said they would back Obama in the party primary over nine other declared or potential candidates, including Sens. Bernie Sanders (I-Vt.), Kamala Harris (D-Calif.), Elizabeth Warren (D-Mass.), and former Rep. Beto O’Rourke (D-Texas).

Obama has said she is not running, and Biden has not announced whether he will launch another White House bid. 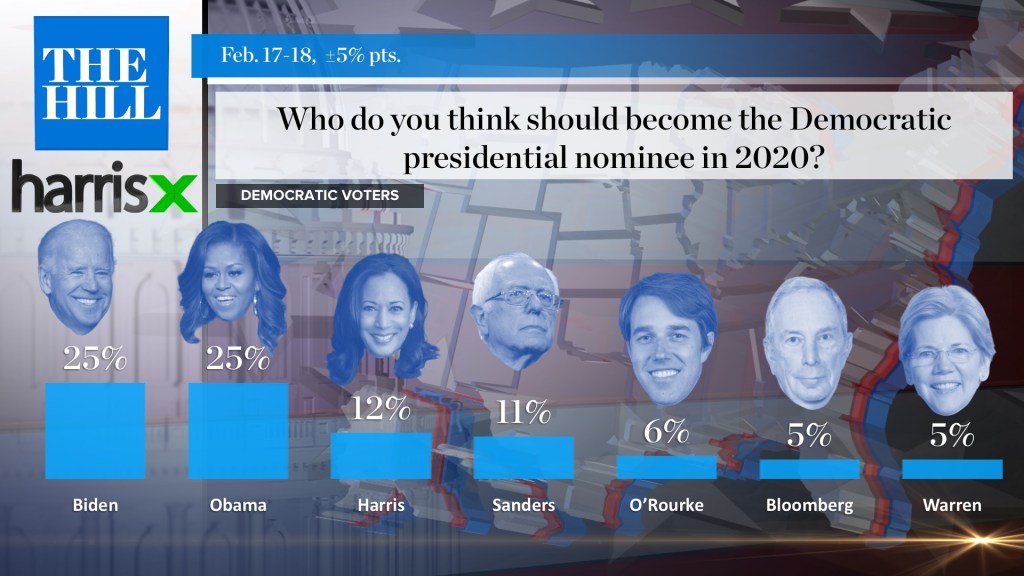 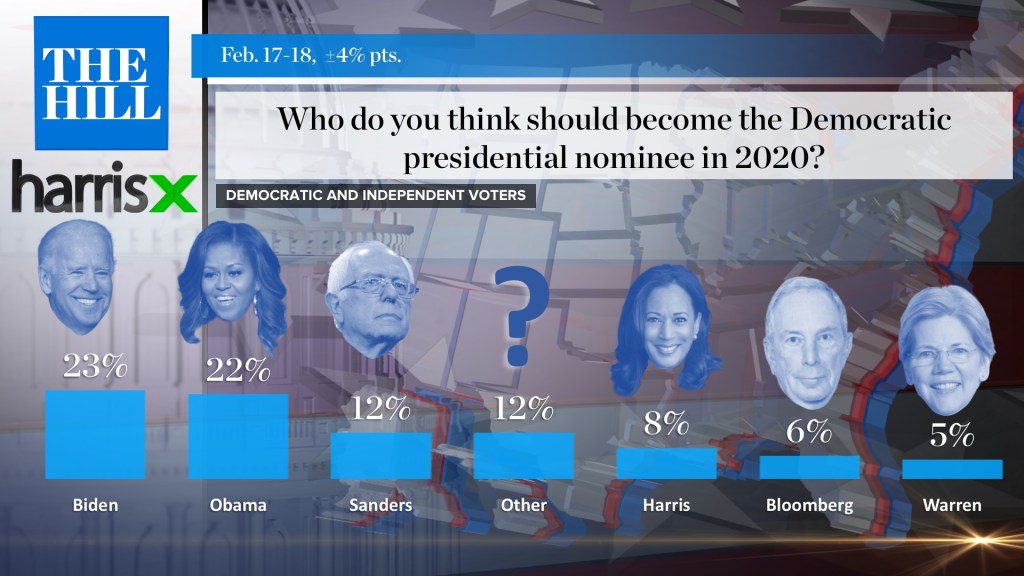 Biden and Obama garnered 23 percent and 22 percent, respectively, when factoring in independent voters, who are allowed to vote in many state primary elections.

Molly Murphy, a partner at Democratic consulting firm ALG Research, said Obama’s popularity is helped in large part because she has never thrown her hat into the ring.

“Because she’s never been a candidate, she’s never been on the ballot, she’s avoided a certain degree of scrutiny that candidates face. And so she’s all icing for people, it’s all good,” Murphy said Tuesday on “What America’s Thinking,” Hill.TV’s show about public opinion and polling.

In the Hill-HarrisX poll, 12 percent of independents and Democrats combined said they preferred another candidate, beyond the choices that were offered, suggesting some dissatisfaction among non-Republican voters with the field of declared and potential candidates.

A November Hill-HarrisX poll found that 14 percent of Democratic respondents picked “none of the above” when asked to choose between Warren, Biden, Sanders, Booker, Harris, Bloomberg and former Democratic presidential nominee Hillary Clinton.

Obama’s surprise appearance at the Grammy awards this month promoted some speculation about a possible 2020 bid. In December, the former first lady said that she had “never” considered a political career and that she had no intention of running for office.

The Hill-HarrisX survey was conducted Feb. 17-18 among a nationally representative sample of registered voters. The overall survey has a sampling margin of error of 3 percentage points.