Fifty-nine percent say they oppose President Trump’s declaration of an emergency to build a wall on the Mexican border, according to a new Hill-HarrisX poll released Wednesday.

The poll found that just 41 percent of registered voters support Trump’s decision, which has drawn lawsuits from 16 states and divided Republicans. 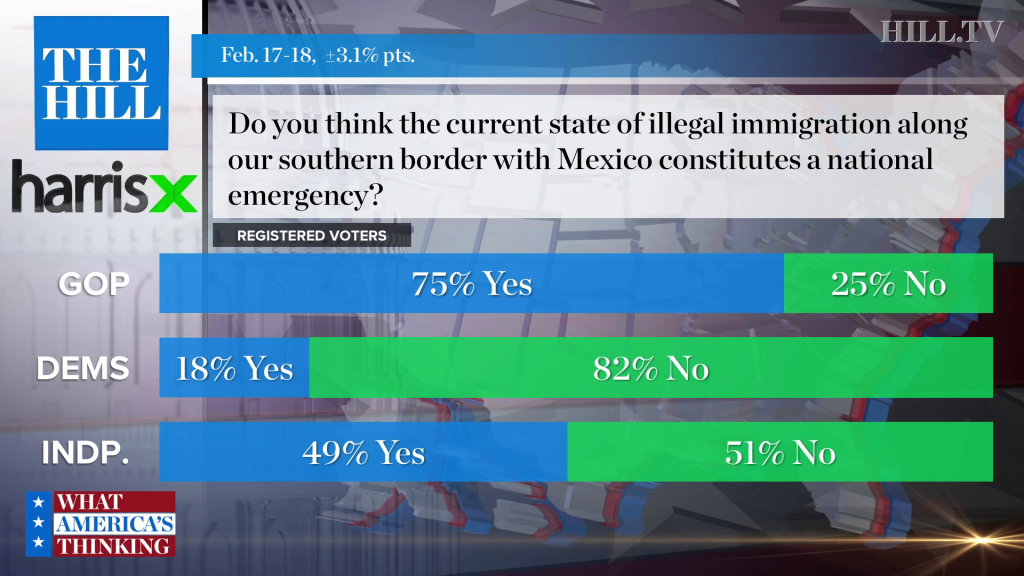 Trump announced the decision on Friday after Congress approved a new border security deal funding the Department of Homeland Security that fell well short of his demands for $5.7 billion in funding for border barriers.

Democrats are expected to bring a resolution of disapproval to votes in the House and Senate, and it seems possible the Democratic measure could pass, forcing Trump into his first veto.

Though a majority disagreed with Trump’s decision, 54 percent of those polled said they did think the situation at the border was an emergency, compared to 46 percent who did not.

Independents were evenly divided with 51 percent saying there is no border emergency while 49 percent said there is.

Non-aligned voters were much more opposed to Trump’s decision to bypass Congress, however, with 57 percent of Independents saying they disapproved of the president’s action while only 43 percent supported it.

Younger people were less likely to support Trump’s emergency declaration with only 32 percent of voters between 18 and 34 saying they approved of it. The vast majority, 68 percent, said they disapproved of the president’s action.

Trump’s proclamation was opposed by a majority of older age groups but by closer margins. Voters aged 65 and up were the most supportive with 54 percent opposing the emergency declaration and 46 percent approving of it.

A slightly larger number of white respondents, 54 percent, said they believed there is a border emergency than approved of Trump’s declaration. The 3-point difference is within the survey’s 3.1 percent sampling margin of error.

The poll was conducted Feb. 17-18 among a statistically representative sample of 1,001 registered voters.

5 hours ago
The Debrief
3 days ago