Most Americans think Trump emergency declaration will be struck down in court: poll

Most voters believe that President Trump’s recent declaration of a national emergency at the U.S.-Mexico border is likely to be struck down in court, according to a new Hill-HarrisX poll.

Fifty-nine percent of registered voters in the poll said they believed Trump’s action was an inappropriate use of emergency powers and it is likely to be struck down. Meanwhile, 41 percent said they think the designation was appropriate and is likely to prevail in court.

At least five different lawsuits have been filed against the emergency proclamation, including one from California and more than a dozen Democratic-led states. The government of El Paso County, Texas, has also sued to block it as well. 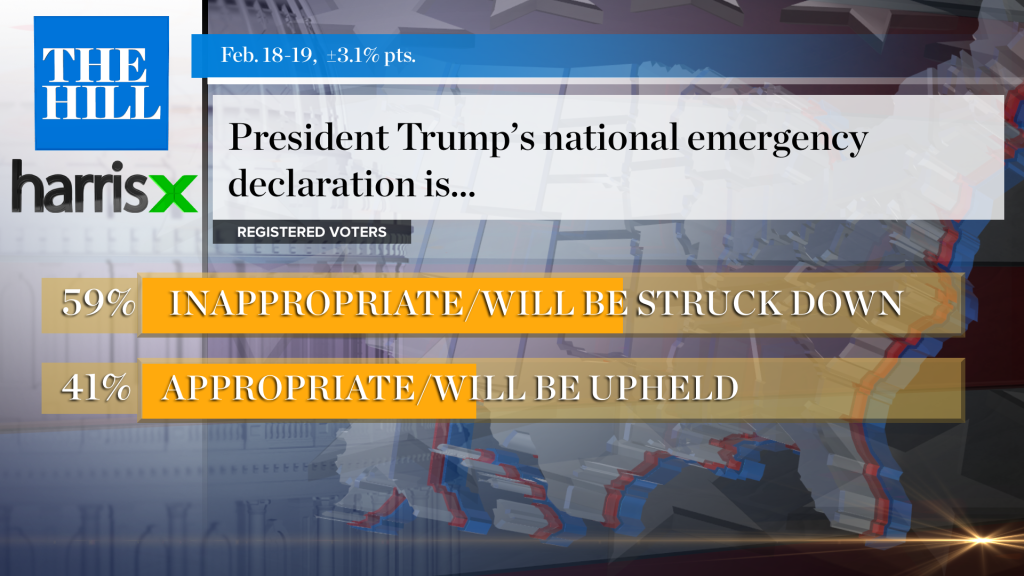 Last week, Trump acknowledged that his emergency declaration would likely face challenges in court but expressed optimism that it would ultimately be upheld at the Supreme Court, comparing it to the legal course for his administration’s travel ban on several Muslim-majority countries.

In the Hill-HarrisX survey, voters of all age and racial groups said that Trump’s proclamation wasn’t likely to survive legal challenges. Most suburban and rural voters said so as well, while a smaller majority of rural voters, 52 percent, said they believed the declaration would pass judicial scrutiny.

Another Hill-HarrisX poll released Wednesday found that 59 percent of registered voters said that they did not approve of Trump’s action, while 41 percent did.

“Honestly when you look at this poll, it might as well have been asking, ‘Do you support or oppose the border wall?'” Mallory Newall, research director at Ipsos Public Affairs, said Thursday on “What America’s Thinking,” Hill.TV’s show about public opinion and polling.

“So really what it comes down to is President Trump’s base on this, that core group of 40 percent of Americans – most of whom are Republican – are in favor of an emergency declaration, are in favor of the $5.7 billion because they fundamentally believe a border wall is the right thing to do,” Newall added, referencing similar findings from Ipsos Public Affairs.

The latest Hill-HarrisX survey was conducted among a representative sampling of 1,001 registered voters Feb. 17-18 and has a sampling margin of error of 3.1 percent.