Polls: Americans want a 70 percent tax rate on the rich, but are less enthused about applying it to themselves

Recent polls have shown that most Americans support increasing taxes on wealthy people but a new survey suggests that they might feel differently about the issue if they suddenly became rich.

In January, a Hill-HarrisX poll found that 59 percent of registered voters said they liked the idea of raising the top income tax rate, which applies to annual income over $10 million, to 70 percent. Other polling has shown that the concept, which was informally floated by Rep. Alexandria Ocasio-Cortez (D-NY), is supported by most of the public. 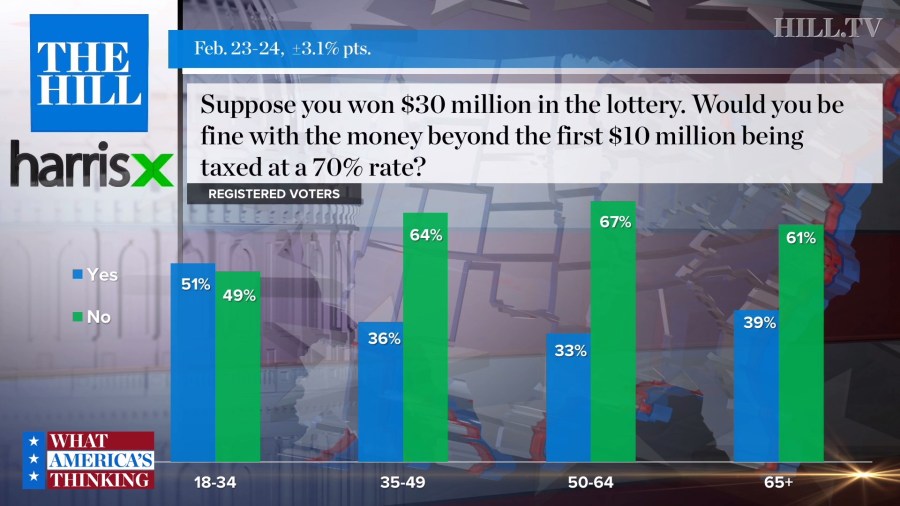 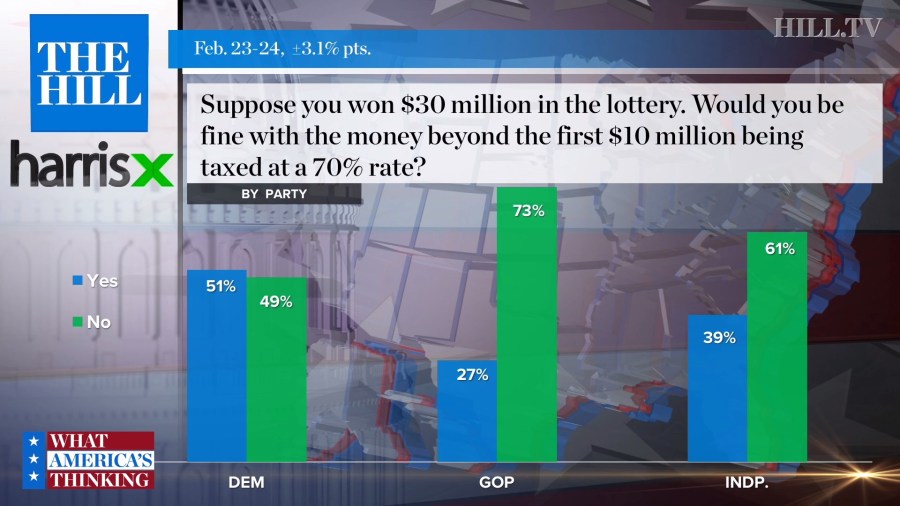 A new Hill-HarrisX poll released Tuesday found that 60 percent of registered voters would not approve of having to pay a 70 percent marginal rate on a hypothetical lottery jackpot of $30 million.

Only 40 percent said they would be fine having their winnings taxed at the higher rate.

“Over 80 percent of Americans say they’re middle-class … so when you talk about taxing the rich, they say ‘well that’s ok, that’s not me.’ If, suddenly, they become rich, they win the lottery, suddenly their viewpoint will change radically,” independent political analyst Bill Schneider said Tuesday on “What America’s Thinking,” Hill.TV’s show about public opinion and polling.

Younger voters were the only age group that was in favor of paying the proposed higher marginal tax. Fifty-one percent of respondents who were between 18 and 34 years old said they would be fine with levy while 49 percent were opposed. A large majority of voters older than 34 were against having their hypothetical winnings taxed in such a manner.

Unsurprisingly, ideology was a factor in responses. Sixty-three percent of voters who described themselves as strongly liberal said they would be fine with tax levy, as did 60 percent of those who said they leaned liberal. The vast majority of moderates, 61 percent, were opposed. Respondents who said they leaned conservatives were even more opposed, 74 to 26 percent. Strongly conservative voters were the most against the idea, 76 to 24 percent.

“The concept of lotteries in some way is actually very similar to how the country actually is structured right now,” Nancy Zdunkewicz, a Democratic pollster told “What America’s Thinking” host Jamal Simmons. “You have more chance of becoming rich and staying rich if you were born rich, and in some ways it is a lottery.”

22 hours ago
Rising
4 days ago