Less than half of those surveyed in a new poll found Michael Cohen’s public testimony to Congress credible.

While more respondents said they found Cohen’s testimony to be credible than those who said it was not, the overall results suggest the high-profile appearance by President Trump’s former personal attorney is unlikely to be a political game-changer.

Thirty-seven percent of registered voters contacted Feb. 28 and March 1 for The Hill-HarrisX poll said they found Cohen’s testimony credible, compared to 25 percent who said they did not find him credible.

Thirty-nine percent said they had not yet formed an opinion of Cohen’s testimony.

Democrats were much more likely to believe Cohen, with 58 saying they found his testimony credible and just 11 percent saying they did not find him credible.

Republicans were much less likely to find Cohen credible, though less than half — 48 percent — said they found his testimony was not believable.

Just 15 percent of Republicans said they thought Cohen was credible, while 37 percent said they were undecided. 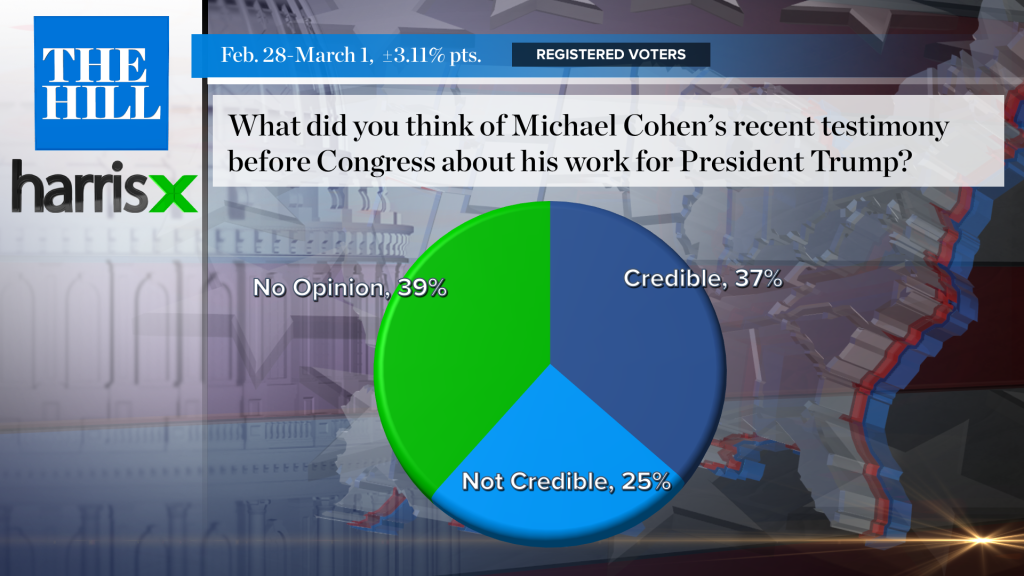 Republicans were more likely than Democrats to say they were unsure about Cohen. Thirty-one percent of Democratic respondents said they had no opinion of Cohen’s claims.

During Wednesday’s hearing, GOP lawmakers on the House Oversight and Government Reform Committee made a point of repeatedly going after Cohen’s credibility, arguing he was willing to lie about the president to reduce his prison sentence.

Trump and the White House have also ripped into Cohen, with the president in a tweet on Friday accusing his former attorney of committing perjury “on a scale not seen before.”

Women were also much less likely to have formed an opinion with 49 percent saying they were unsure what to think of Cohen. Thirty-two percent said they believed him while 19 percent did not. 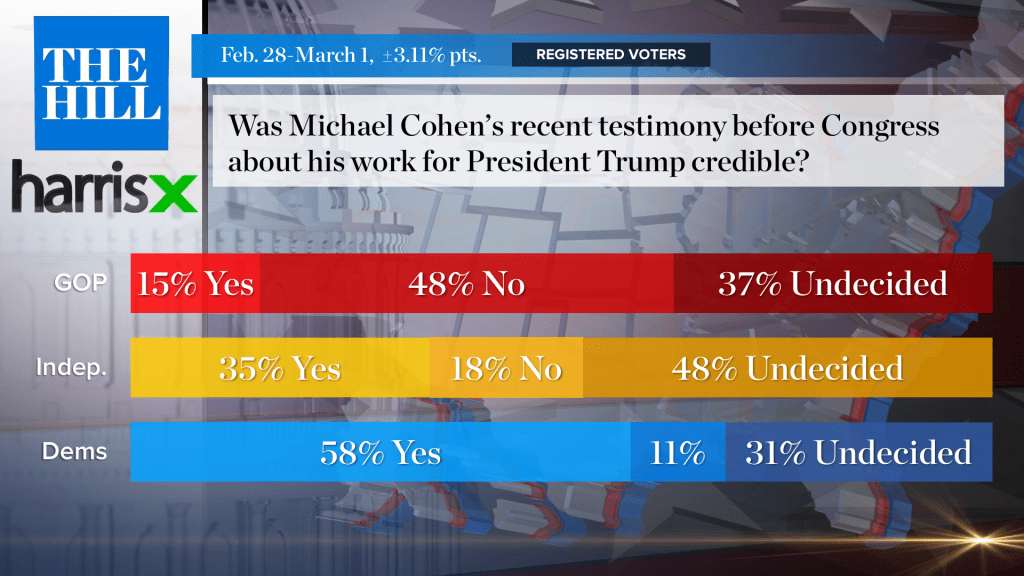 Forty-two percent of men said Cohen was credible, 31 percent said he was not, and 27 percent were unsure.

The majority of younger voters, those between the ages of 18 and 34, said they had no opinion of Cohen. Fifty-six percent were unsure of his allegations.

The latest Hill-HarrisX survey was conducted among 996 registered voters and has a sampling margin of error of 3.11 percentage points.
—Matthew Sheffield