A strong majority of voters say Americans should make economic sacrifices to help the environment, according to a new poll.

In a Hill-HarrisX survey, 68 percent of registered voters said the country should make “some” or “big” economic sacrifices in an effort to improve environmental conditions.

Twenty-six percent of respondents said “big” sacrifices are needed, while 42 percent said “some” sacrifices should be made.

The survey comes amid a debate over what steps should be taken to combat climate change. Rep. Alexandria Ocasio-Cortez (D-N.Y.) and other progressive lawmakers have made the large-scale “Green New Deal” a focal point of the Democratic Party’s legislative agenda, a move that has been met with criticism from Republicans who argue that the initiative amounts to socialism and would increase costs for all Americans.

Over the weekend, President Trump slammed the Green New Deal, adding that he would be pleased to see Democrats pursue it. Meanwhile, Senate Majority Leader Mitch McConnell (R-Ky.) has been pushing for a vote on the resolution in hopes of putting Democrats on record for their support of the measure, which has created some divisions in the party. 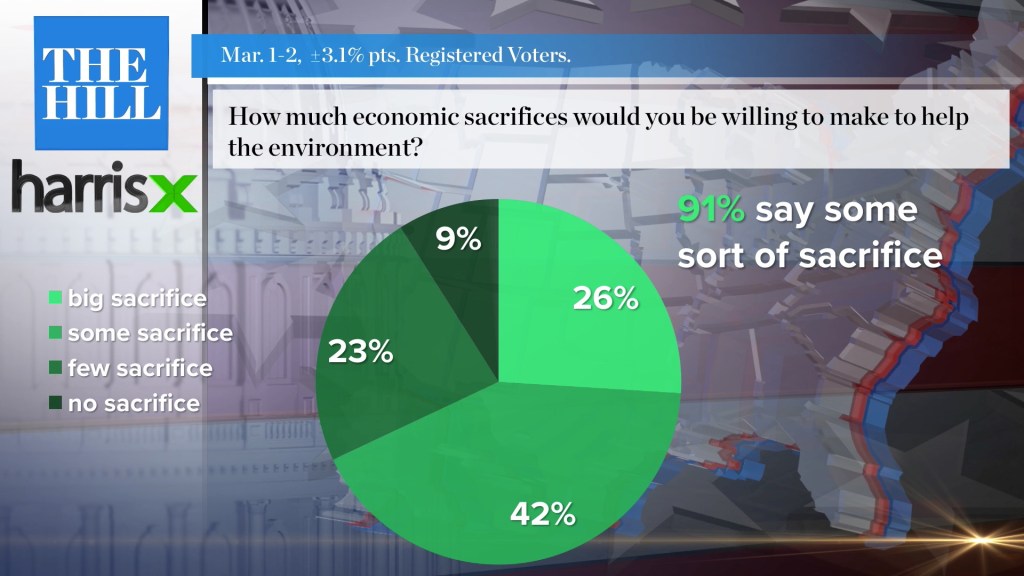 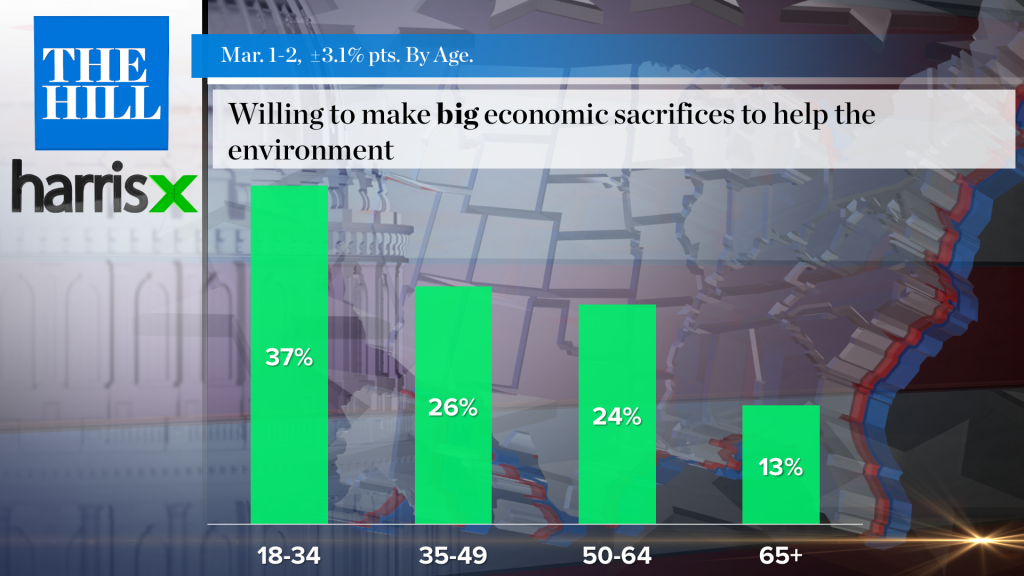 Public support for larger-scale environmental programs has increased in recent years, according to polling.

In a March 2018 poll, Gallup found that 62 percent of adults surveyed said they believed the federal government was doing “too little” to protect the environment, a 14-point increase from a similar survey in 2010. Last year’s survey also found that 57 percent of respondents favored prioritizing environmental precautions over the economy, compared to 35 percent who disagreed.

In the Hill-HarrisX survey, younger voters were much more inclined to say action is needed, with 37 percent saying Americans should make “big” economic sacrifices.

Twenty-six percent of respondents between the ages of 35 and 49 agreed with that idea, as did 24 percent of those between 50 and 64. Voters 65 and older were least likely to say big economic sacrifices were needed, with only 13 percent agreeing.

Forty percent of Democratic respondents said big economic costs should be incurred, compared with 17 percent of independents and Republicans saying the same.

At the same time, 39 percent of Republicans said “some” sacrifice should be made, a view shared by 46 percent of independents.

The survey was conducted online March 1-2 within the United States among 1,003 registered voters by HarrisX, with a sampling margin of error of plus or minus 3.1 percentage points.