Poll: Most Americans not interested in new regulations for big tech companies

Tightening regulations on Google, Facebook and Amazon, which have increasingly become the rhetorical targets of President Trump and some of the Democrats who want to replace him, does not appear to be something that most Americans are interested in, according to a new Hill-HarrisX poll.

When asked to choose between whether big tech firms should be regulated or be allowed to operate freely, a majority of registered voters, 53 percent, chose the latter option. Forty-seven percent said the companies should face more government rules. 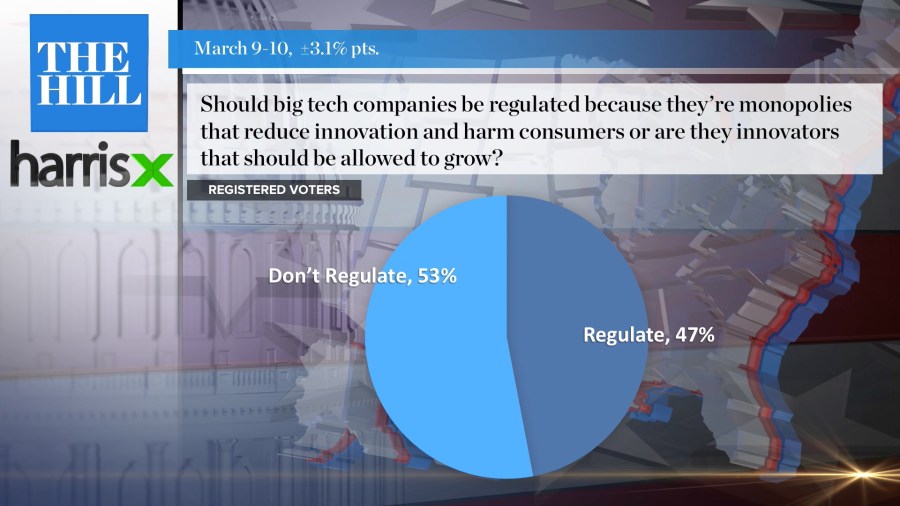 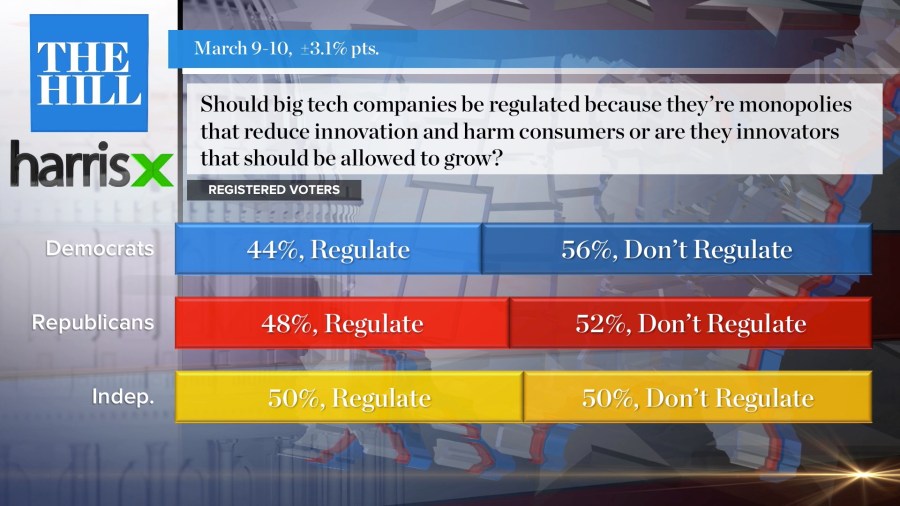 The results show that the public is closely divided on the newly emerging issue.

Trump has repeatedly called out social media companies for alleged unfairness to conservatives and has  accused Amazon of bending government rules in order to maximize its profits. While the administration has begun opposing major media consolidations, such as a merger between AT&T and Time Warner, it has yet to push for legislation that would rein in technology conglomerates.

On the Democratic side, two of the party’s presidential candidates, Sens. Elizabeth Warren (Mass.) and Amy Klobuchar (Minn.), have begun calling out large tech firms and arguing for new policies to address them. In an interview with The Washington Post published last Tuesday, Klobuchar said that internet giants have become “a major monopoly problem.” Last Friday, Warren unveiled a new proposal to break up Facebook, Amazon and Google.

“I think that what is interesting is how bipartisan the numbers are,” Jim Hobart, a Republican pollster said Monday on “What America’s Thinking,” Hill.TV’s show about public opinion. “It’s pretty rare that you see numbers like that on a question.”

In the new Hill-HarrisX survey, 48 percent of Republicans and 44 percent of Democrats favored additional regulations for technology firms. Independent voters were evenly split on the question.

“Typically, Democrats don’t have too much of a problem taking on big business–that’s often a Democratic talking point,” Hobart said. “For Republicans, I think their view is that some of these organizations, especially Facebook, are biased… Obviously, Wall Street has been a popular attack line for members of both parties for a long time, going after Wall Street. I do think it’s interesting that we seem to be moving in the direction of going after Silicon Valley, going after tech.”

Other recent research has shown similar public division on the topic of regulating big tech. A Morning Consult poll earlier this month that asked if large technology companies should be regulated because they have “too much power” found that only 44 percent of registered voters agreed. Thirty percent of respondents disagreed while 25 percent were unsure. The survey also found that Republicans were 3 points more likely than Democrats to say that they “strongly agreed” that technology giants should be regulated.

The Hill-HarrisX poll was conducted March 9-10 among 1,001 registered voters and has a sampling margin of error of 3.1 percentage points. Details, including full crosstabs and question wording can be seen in the embedded spreadsheet below.