Americans over the age of 50 are strongly opposed to the idea of using taxpayer dollars to provide universal daycare or preschool, according to a new poll.

A Hill-HarrisX survey released Tuesday found that 72 percent of registered voters age 50 or older said daycare costs should be paid by parents, compared with 6 percent who said the government should pick up the tab. Twenty-one percent said they favored federal subsidies to halve the costs to parents. 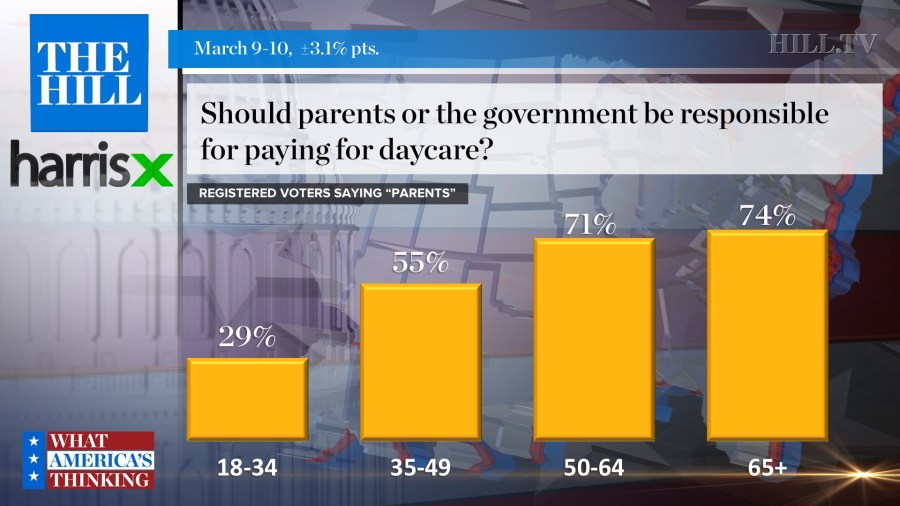 Younger adults were much more supportive of federally funded daycare. Thirty-seven percent of respondents between the ages of 18 and 34 supported tuition-free daycare, and 34 percent backed half-cost daycare. Twenty-nine percent said daycare expenses should be paid by parents.

Fifty-five percent of respondents between the ages of 35 and 49 said parents should be responsible for daycare costs. Thirty-percent favored a government program to cover half the cost, while 15 percent backed government-funded daycare.

Public opinion polls on the topic have shown varying levels of support for funding for pre-kindergarten childcare and education.

A 2018 poll conduced for a Maryland-based education advocacy group found that 75 percent of likely voters in the state favored expanding pre-k to all 4-year-old children. But an Urban Institute study published last year found that support for daycare education programs declined if people were informed that paying for them might increase taxes.

“I think there is an incredible amount of support for increased funding for early childhood education, and we see that in polls over and over again,” Republican pollster Jim Hobart told Hill.TV on Tuesday. “Daycare is just that — it’s early childhood education. I think terming it as daycare may be rubbing people a little bit the wrong way in the polling question.”

Federal law provides up to a $6,000 annual tax credit for eligible childcare expenses. The U.S. government also provides funding for Head Start programs, which served 900,000 pre-K students in 2017, according to government data.

Several states like Oklahoma, Massachusetts and New York also have their own programs to provide universal daycare.