A majority of Americans favor mandatory childhood vaccinations but new polling suggests an ideological divide is emerging with large numbers of self-described conservatives beginning to oppose them.

While some prominent Democrats, such as Robert Kennedy Jr., have promoted unscientific claims that vaccines damage children, Republican elected officials have been more likely to be skeptical. Those concerns seem to be filtering down to GOP voters, according to a new Hill-HarrisX poll.

The survey, which was conducted March 9 and 10, found that 61 percent of registered voters support a federal childhood immunization mandate. Only 39 percent were opposed.

About the same percentage of various age groups favored immunization requirements, while voters with college degrees were 6 points more likely to favor them. Many school districts across the country require parents to submit written proof that their children have been vaccinated, although the particular immunizations vary by jurisdiction. 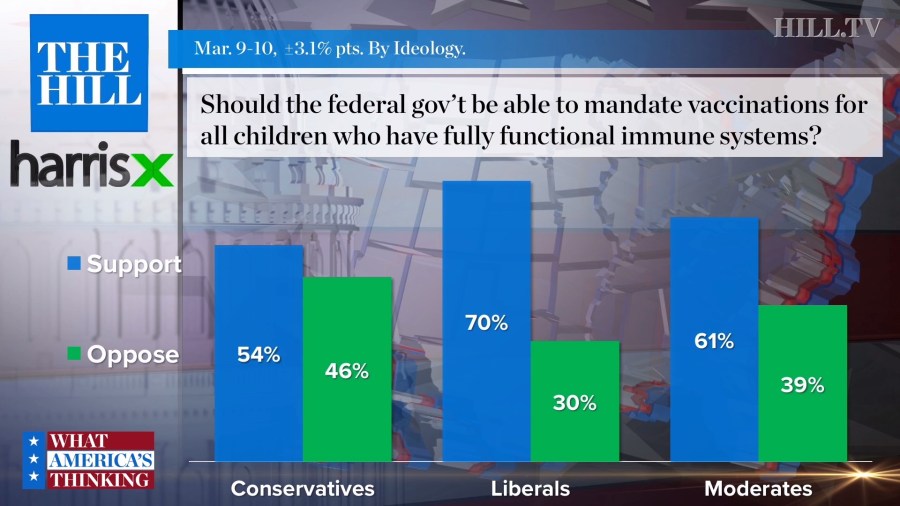 In the survey data, there were some differences between respondents from different regions of the country but the greatest division observed was ideological, with self-described liberals being 16 percentage points more likely to support vaccine mandates than respondents who called themselves conservative.

Broken down by party affiliation, similar trends were apparent, 54 percent of Republicans favored vaccine requirements, along with 59 percent of independents and 68 percent of Democrats.

President Trump is among several prominent GOP elected officials who have raised unfounded questions about vaccines possibly causing autism. Concerns about vaccines have also been a popular topic in far-right media, including the program of conspiracy theorist Alex Jones.

In 2012, he Trump warned Fox News viewers in an interview that he had become “pretty familiar with the subject” and that he “strongly believed” that vaccines caused autism.

The future president returned to the subject in a 2014 Twitter post. “I am being proven right about massive vaccinations—the doctors lied. Save our children & their future,” he wrote.

After being elected, Trump and members of his official transition team met repeatedly with Kennedy to discuss setting up a “vaccine safety commission” to explore accusations that childhood immunizations are linked to autism.

Other public polls have shown higher skepticism toward vaccines among more conservative Americans. In 2016, the Pew Research Center found that self-described conservatives were 16 percentage points more likely to favor giving parents the ability to determine whether their children receive immunization care.

Opposition to mandatory childhood vaccinations “does appear to be correlated with what I’d call libertarian or anti-authority tendencies and sentiment,” Julia Clarke, a pollster with the Ipsos polling company told Reuters about similar findings in a 2015 survey.