Most Americans surveyed in a Hill-HarrisX poll released Wednesday disapprove of the job that President Trump is doing, but he has not lost any ground recently.

Forty-five percent of registered voters in the March 18-19 survey said they approved of how Trump is conducting his official duties. Fifty-five percent disapproved. 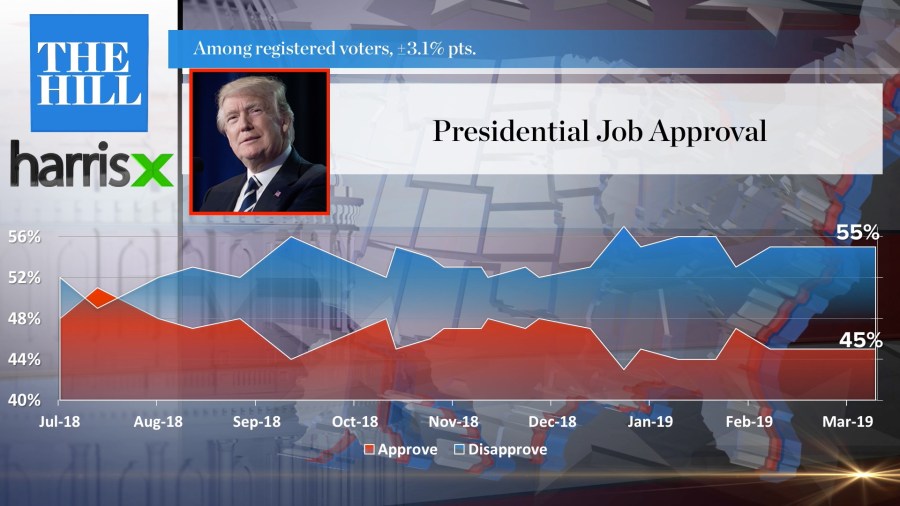 Trump’s job approval rating has been quite stable in recent weeks. He received the same ratings during the previous Hill-HarrisX surveys conducted on March 5-6 and Feb. 17-18. While the president has not lost any support, he has also not gained any, suggesting that the public has settled into its opinions about Trump, despite his recent remarks about immigrants “invading” the United States and insulting the late Sen. John McCain (R-Ariz.), which angered many of his critics.

“I guess if the Mueller report came out and it said ‘we absolutely found nothing, anywhere that was negative,’ I’m not sure that would even do a whole lot,” Lee Miringoff, the director of the Marist Poll, told Hill.TV on Wednesday, referring to special counsel Robert Mueller’s investigation.

“We’re in a polarized era that didn’t start with Donald Trump and Hillary Clinton, we’ve been going that way since the early 90s,” Miringoff added. “There’s very few people on the fence and when it comes to Donald Trump, there’s even fewer.”

Younger voters gave Trump his lowest marks in the latest poll, with 61 percent disapproving of his presidential performance and only 39 percent approving.

Republicans continue to give the president strong support with 82 percent approving of him and only 18 percent disapproving. Those numbers were almost the exact inverse of Democrats’ views. Eighty-three percent of Democratic respondents said they disapproved of Trump while 17 percent viewed him positively.

Independent voters were mostly negative about Trump’s job performance, but not by as significant of a margin as Democrats. Sixty percent said they disapproved of Trump’s official conduct while 40 percent approved.