Americans are deeply divided along partisan lines over whether the Electoral College, the state-by-state voting mechanism set up by the U.S. Constitution to choose the president, should be abolished.

A majority of Democratic voters, 60 percent, said they supported abolishing the Electoral College and allowing whoever receives the most votes nationwide to become president. Just 20 percent said they wanted to keep the current system. Twenty-one percent were unsure. 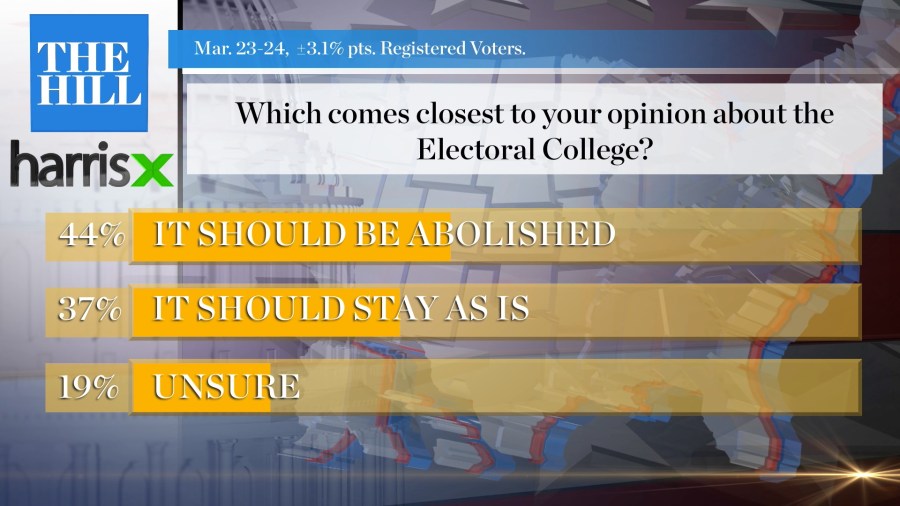 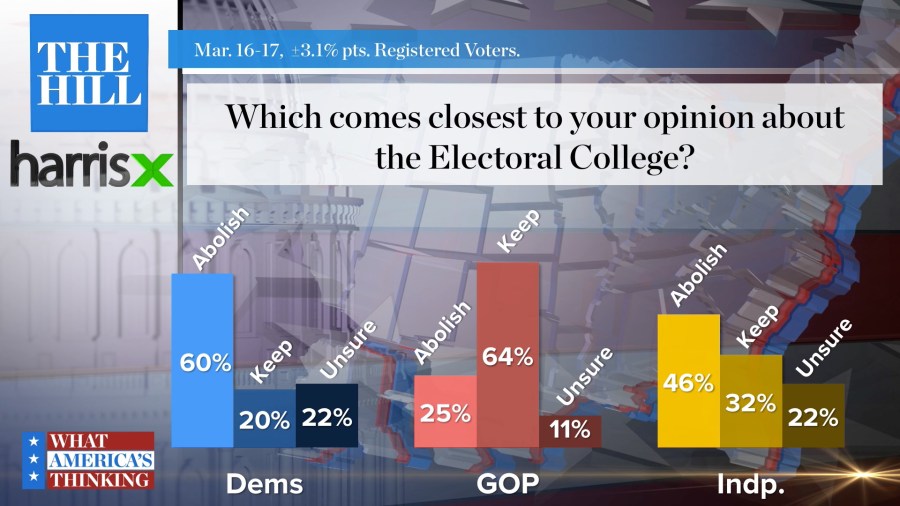 The voting system has become a hot-button issue among some Democratic activists in recent years after Trump became the second Republican to become president after losing the national popular vote in 2016. George W. Bush won the 2000 election despite receiving fewer votes nationwide than his  opponent, Al Gore.

In the survey, Republicans overwhelmingly favored keeping the voting method with 64 percent of respondents saying they wanted to retain it but only 25 percent in favor of eliminating it. Eleven percent of GOP respondents were unsure.

Independents were more in favor of switching to a national popular vote but less than a majority, 46 percent, had this opinion. Thirty-two percent wanted to retain the current method of allocating presidential votes according to each state’s total number of U.S. senators and representatives. Twenty-two percent were unsure.

Surveys conducted by Gallup have shown a partisan divergence in recent years about the Electoral College. In 2012, 54 percent of Republican-leaning adults said that they wanted to amend the Constitution to allow the candidate with the most votes nationwide to become president. But in 2016, following Trump’s election, GOP support for the idea dropped to just 19 percent.

Republicans’ change of opinion in the Gallup surveys appears to have been driven by awareness that Trump did not win the national popular vote. Fifty-six percent of GOP respondents correctly said that the president’s Democratic rival, Hillary Clinton, had won more votes nationwide.

Trump has given conflicting statements about the Electoral College. Although it enabled him to become president, in 2018, he called for switching away from the voting system on the basis that “it’s much easier to win the popular vote.”

Last week, however, Trump signaled support for the Electoral College, saying that “cities would end up running the country” if the U.S. were to switch to a popular-vote presidential voting method, an argument that several conservative commentators have made.

While Democratic-leaning activists have become much more interested in changing America’s method of electing presidents, the issue is not likely to prove a significant mobilizing issue for the party, pollster Mallory Newall said on Tueday’s broadcast of “What America’s Thinking.”

“It is probably not the number-one or number-two issue that’s going to drive people to the polls. But it is something that has more traction among Democrats, particularly after 2016,” she told host Jamal Simmons.

Eliminating the Electoral College has been tried several times in Congress. The last time it gained significant support was between 1969 and 1971 when a constitutional amendment to switch to a popular vote passed overwhelmingly in the House of Representatives but failed to overcome a Senate filibuster.