Poll: Few Americans say they have benefited from key aspects of ObamaCare

Few Americans believe their health care situation has been improved by key components of the 2010 Affordable Care Act (ACA), according to a Hill-HarrisX poll released Thursday.

Across party lines, most registered voters contacted for the March 30-31 survey said major provisions of former President Obama’s signature health care law either had no real impact on them or had made things worse. 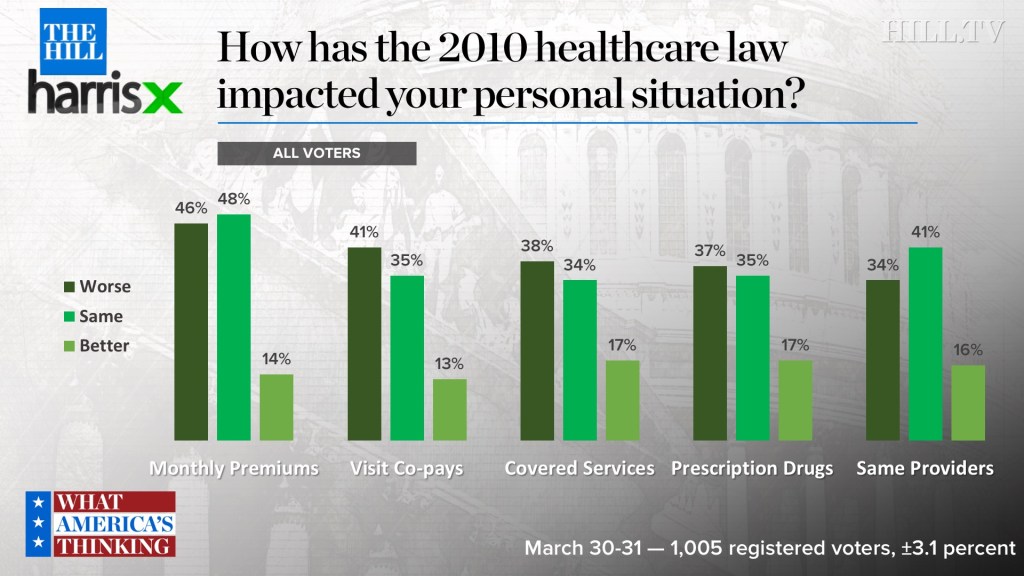 Forty-one percent said their access to medical service providers is the same as it was before the ACA, while 16 percent said it is better. Thirty-four percent said things are worse in terms of access.

Respondents were almost evenly divided when it came to the ACA’s impact on prescription drug costs and services covered by insurance providers. Thirty-seven percent said their drug cost situation was worse, while 35 percent said it was the same.

Seventeen percent of respondents said they are now better off in both areas.

In terms of medical services paid for by insurance companies, 38 percent of respondents said their coverage has worsened, with 34 percent saying it has improved.

The poll also found that using “ObamaCare” versus generic terms to describe the law did not have a statistically significant impact on responses.

When broken down along party lines, Democrats were more likely to say they had not benefited from the ACA than to say the law has helped their personal situations.

Republican respondents were more likely to say the law had harmed their situations, except with regard to monthly premiums and access to their same medical providers.

The survey found some significant differences between income brackets. Voters with household incomes below $35,000 were more likely than other economic groups to say they were unsure about the law’s impacts on their lives. 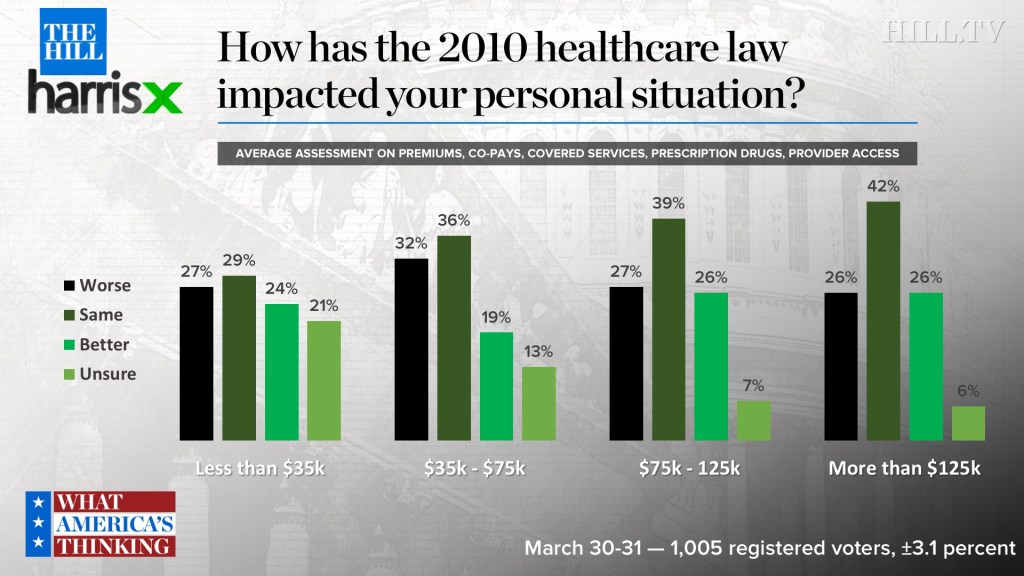 By contrast, voters in households with annual incomes $75,000 and above were much more certain in their opinions of the ACA. On average, only 6 percent of this group said they were uncertain about the law’s personal impact on them. Respondents with higher income levels were much more likely to report that the law had no effect on their premiums, co-pays, covered services, prescription drug costs, and provider access.

“I think a lot of this is messaging,” Jessica Fulton, director of economic policy at the Joint Center for Political and Economic Studies, said on Thursday’s broadcast of “What America’s Thinking,” Hill.TV’s show about public opinion and polling. “A lot of this means that people who support ObamaCare need to do better at doing that messaging.”

Despite voters’ comparative dissatisfaction with certain components of the ACA, surveys taken since President Trump took office have shown the public is not interested in repealing the law. A poll taken during March and April by Morning Consult found that only 29 percent of registered voters believed the health care law should be be repealed. About as many, 28 percent, believed the law should be expanded.