Former Vice President Joe Biden leads the Democratic pack of contenders for the White House despite a week of accusations of improper touching and kissing from seven women, according to a new Hill-HarrisX poll released Monday.

Biden, who has yet to formally enter the race, and Sanders were well ahead of the rest of the candidates in the poll of 660 registered voters who identified as Democrats or independents. 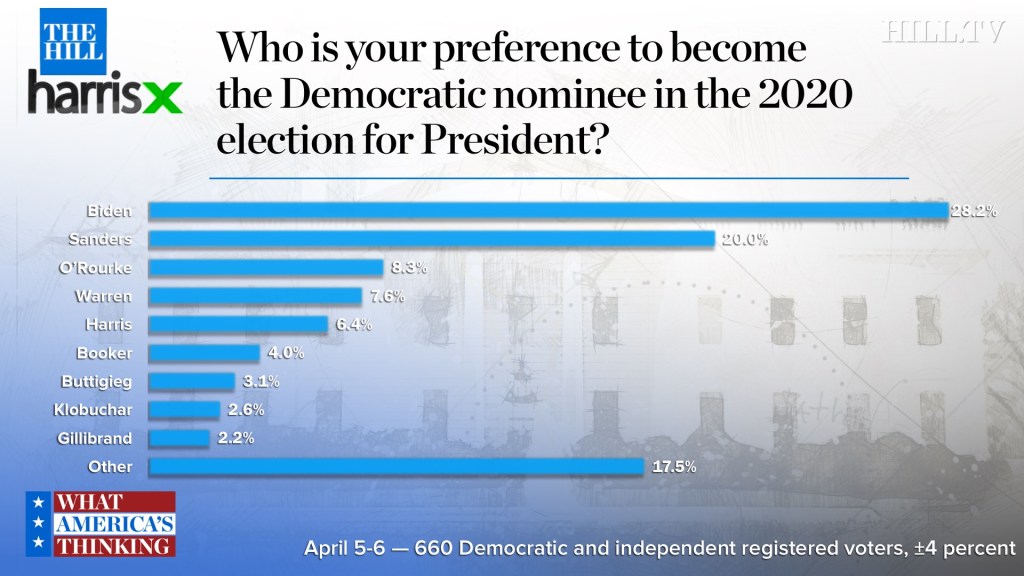 Biden enjoyed a strong lead among respondents who identified as Democrats. The former vice president was the top choice of 36 percent of party loyalists compared to Sanders’s 19 percent. Harris was the third-most popular choice among Democratic voters with 9 percent.

Sanders was the top choice of voters who identified as independents, with 21 percent support to Biden’s 19 percent. O’Rourke was the pick of 10 percent of independent voters, while Warren was named by 9 percent.

“That Bernie Sanders and his scary democratic socialist platform hasn’t scared away people who self-identify as independents tells me perhaps there’s a lot more left-leaning independents than we discuss generally,” Sophia Tesfaye, the deputy politics editor at Salon, said on Monday’s broadcast of “What America’s Thinking.”

“We discuss independents as though they’re moderate, more conservative, but there’s a lot of disillusioned former Democrats out there,” she added.

The former vice president led among respondents of all parties across every age group except for those who were between the ages of 18 and 34. Sanders was the top choice of that group, with 21 percent to Biden’s 18 percent. 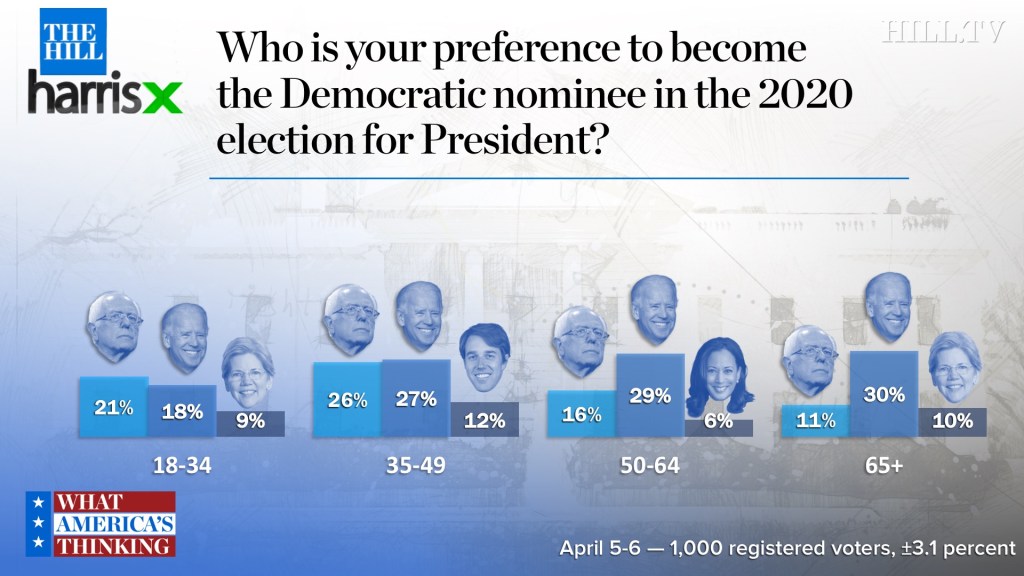 Among voters of all parties who were between 35 and 49, Biden led with 27 percent support compared to Sanders’s 26 percent. O’Rourke was the third-most popular candidate with the group, receiving 12 percent support.

The former vice president was the top choice of 29 percent of respondents between the ages of 50 and 64. No other candidate received double-digit support among the age group aside from Sanders, who had 16 percent support.

Among respondents aged 65 and up, Biden received 30 percent support, while Sanders received 11 percent. Warren was the choice of 10 percent. No other candidate received double-digit support.

“U.S. voters still skew older and that’s what gives Biden a lot more traction amongst registered voters and in the general population than what Sanders has,” Dritan Nesho, the CEO of HarrisX told “What America’s Thinking” host Jamal Simmons.