Democratic voters confident that Biden and Sanders can defeat Trump, less certain about other candidates’ chances

Democrats are most confident that former Vice President Joe Biden and Sen. Bernie Sanders (I-Vt.) can defeat President Trump in a general election, according to a new Hill-HarrisX poll.

In the survey, 75 percent of Democratic respondents said that they believed that Biden had a strong or some chance of beating Trump in the general election next year, while 64 percent said the same of Sanders. 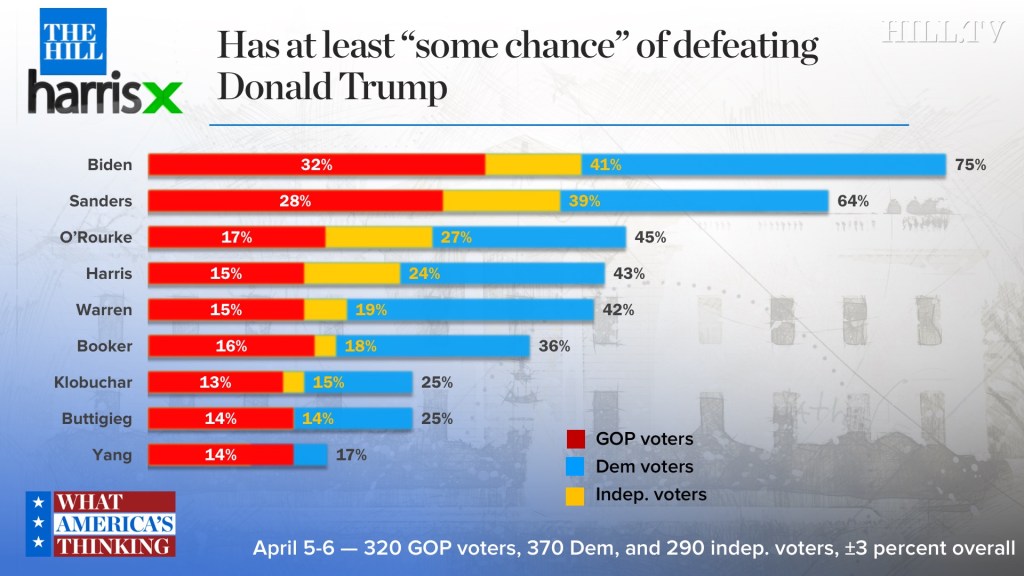 None of the other potential and declared Democratic candidates were rated by more than half of the party’s voters as having at least some chance of defeating Trump.

Forty-five percent of Democrats in the survey said that they believed former Rep. Beto O’Rourke (D-Texas) had at least some chance of defeating the president, while 43 percent said the same about Sen. Kamala Harris (D-Calif.).

Biden, who is expected to soon enter the Democratic race, and Sanders have routinely polled at the top of surveys of Democratic voters. The Hill-HarrisX survey suggests Dems desperate to eject Trump from the White House may be gravitating to the two men because they see them as having the best chances to defeat Trump, according to Sophia Tesfaye, the deputy politics editor at Salon.com.

“This time around, especially after 2016 for Democrats, the biggest driver for popularity is can you beat Donald Trump,” she said Tuesday on “What America’s Thinking.”

Both Biden and Sanders are making plays to appeal to white, working-class voters in states such as Pennsylvania, Michigan and Ohio that Trump won in 2016.

Republicans polled thought that all of the Democratic hopefuls would fall to Trump, but Biden is seen as the greatest threat.

Independents were also more skeptical of the Democratic candidates’ chances. Forty-one percent said they believed Biden had at least some chance of willing while 39 percent said that Sanders did. 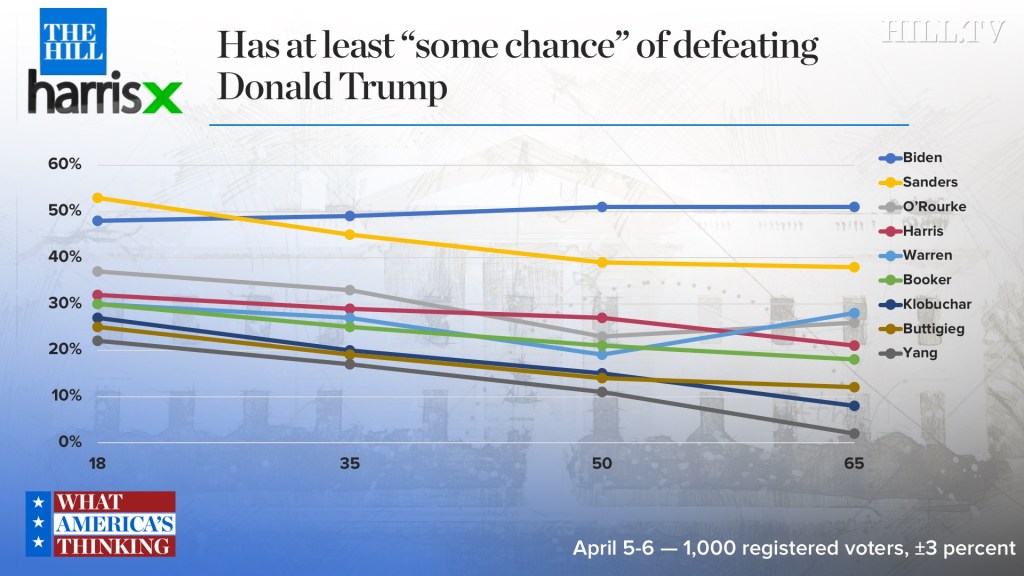 “For candidates that have very high name recognition, like Elizabeth Warren, Joe Biden, or Bernie Sanders, this is not good news,” Dritan Nesho, the CEO of HarrisX said.

“I think the other candidates that have a lot of room to grow will see their numbers shift up and it seems to me that that’s where the problem is and the traction might be in the future months,” Nesho added.

Across age groups and among voters of all partisan persuasions, Biden was the Democratic hopeful that voters said had the best odds with around 50 percent saying he had at least some chance of victory. But among younger voters — those between 18 and 34 years of age — 53 percent said they believed that Sanders could defeat Trump. Assessments of the senator’s chances were lower among voters 35 and up.

3 hours ago
Rising
1 day ago