Americans trust Republicans over Democrats to better handle the economy by 12 points, according to the latest Hill-HarrisX poll of registered voters.

The results indicate a bump for Republicans and a slide for Democrats since a poll conducted February 9-10. In that survey, 42 percent said they trusted the GOP on the economy to 38 percent for Democrats — a 4-point edge. Twenty percent in February said they were unsure. 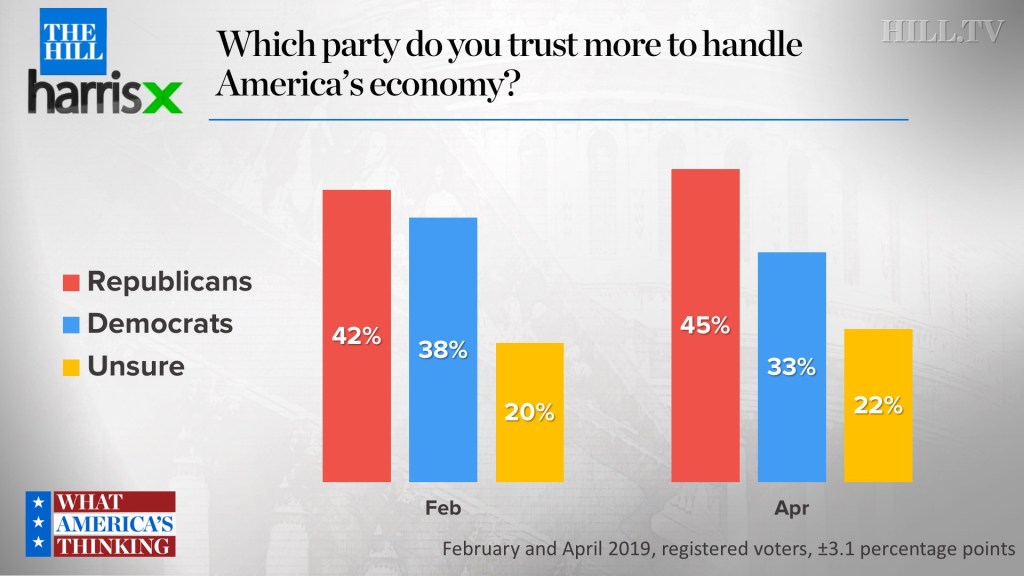 The poll also finds respondents expressing less confidence in Democrats since February on a host of issues, while trust in the GOP has neither declined nor increased.

On the hot-button issue of immigration, 42 percent of voters in the April survey said they trusted the GOP, the exact same percentage that the February study found. Trust for Democrats on the issue, though, declined from 40 percent to 37 percent.

This trend was also observable on the topic of foreign policy where trust in Republicans stood still at 41 percent while faith in Democrats declined 4 points to 34 percent. Similarly, voters were 4 points less confident in Democrats about homeland security in the latest survey but 1 point more trusting of the GOP compared to February.

One issue where the GOP appears to have gained slightly is on the topic of health care, though the party is still behind Democrats.

In the April survey, trust in Democrats on the issue declined 4 points from February, 46 percent to 42 percent. Confidence in the GOP increased 3 percent, from 34 percent to 37 percent. That gain however is within the poll’s 3.1 percent sampling margin of error.

The debate over health care intensified after the Trump Department of Justice last month backed a court ruling that would declare the Affordable Care Act unconstitutional. President Trump vowed that the GOP would become “the party of great healthcare” and pass legislation to replace ObamaCare, but Republican senators balked at revisiting an issue they believe hurt them in the 2018 midterms.

Among voters who identified as Republicans, trust in the GOP on healthcare increased from 72 percent to 78 percent from February to April. It increased 5 points among independents to 34 percent, but saw no movement among Democrats, steady at only 6 percent.

“The very first couple of polls that we did in February or March of 2017, Republicans had the advantage [on healthcare] and they lost it as soon as they tried to repeal [ObamaCare],” Eli Yokley, a political reporter with Morning Consult told Hill.TV in reference to the polling firm’s own research.