Voters are deeply divided on whether the media has been fair in its coverage of the circumstances surrounding Russia’s involvement in the 2016 U.S. presidential election, according to a poll conducted just days before the expected release of special counsel Robert Mueller’s report. 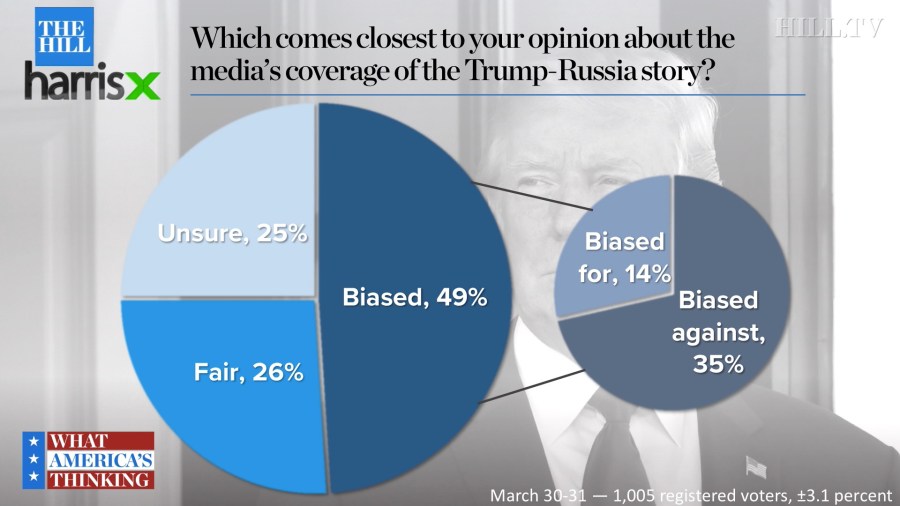 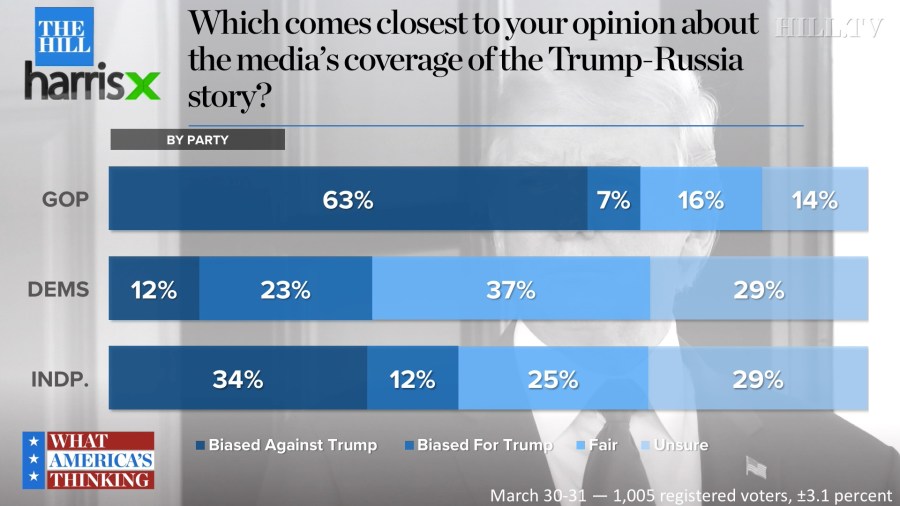 In a Hill-HarrisX survey of registered voters, 35 percent of respondents said most of the Trump-Russia stories in the news have been biased against President Trump. Twenty-six percent said the reporting was fair, and 14 percent said it was skewed in favor of Trump. One-quarter of voters said they were unsure.

Sixty-three percent of Republican respondents said the press has been unfair to the president, while 16 percent said the Trump-Russia coverage was fair. Seven percent said journalists were biased in favor of Trump, and 14 percent said they were unsure.

“For the most part, if you’re a Republican … you think that the media treated him unfair in this investigation,” Joanna Piacenza, features editor at Morning Consult, said Friday on Hill.TV’s “What America’s Thinking.”

“What’s interesting about this is that the Democrat number is so low,” she added. “And I think part of that is among Democrats, I feel like there was some sort of let-down when the investigation actually came out … they expected fireworks.”

Thirty-four percent of independent voters said the coverage was biased against the president, while 29 percent were unsure. Twenty-five percent said journalists had mostly been fair with their reporting, and 12 percent said the news stories favored Trump.

The plurality of women who responded to the survey — 34 percent — said they were unsure about the coverage, while 32 percent said the reporting was unfair to the president.

Among men, a 39 percent plurality said media organizations had been unfair to Trump, and 32 percent said most Russia-related coverage had been fair. Fifteen percent of male respondents said they were unsure.

Americans age 65 and up were much more likely to see coverage as biased against the president. Forty-four percent shared that opinion, compared to just 28 percent of voters between 18 and 34 who agreed.