Poll: Only 18 percent say they are paying less under Trump tax law

Less than one in five registered voters say they paid less in taxes during the first year of President Trump’s landmark tax law, a Hill-HarrisX poll released Monday finds.

Only 18 percent of respondents say they are paying less in federal taxes for 2018 compared to 2017 in the survey, which was taken ahead of the April 15 tax deadline. 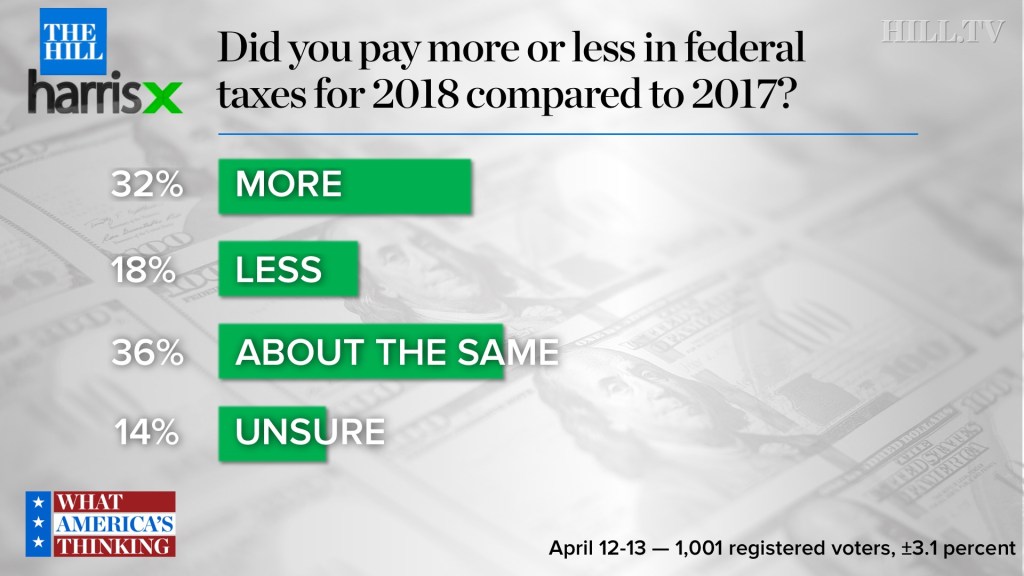 A majority said their 2018 tax bill was about the same or higher compared to 2017. Thirty-two percent said their federal taxes were higher under the Trump tax law. A plurality of respondents, 36 percent, said they owed about the same in federal taxes compared to the previous year. Fourteen percent said they were not sure whether they paid more or less.

Monday marked the filing deadline in most states. Trump’s tax law delivered $1.5 trillion in cuts to businesses and individuals but the poll highlights how most Americans don’t believe they benefited under the changes.

The survey’s finding that 18 percent of voters believe their taxes went down is similar to a March poll from NBC News and The Wall Street Journal which found that only 17 percent of adults contacted believed their federal liability had declined in 2018. 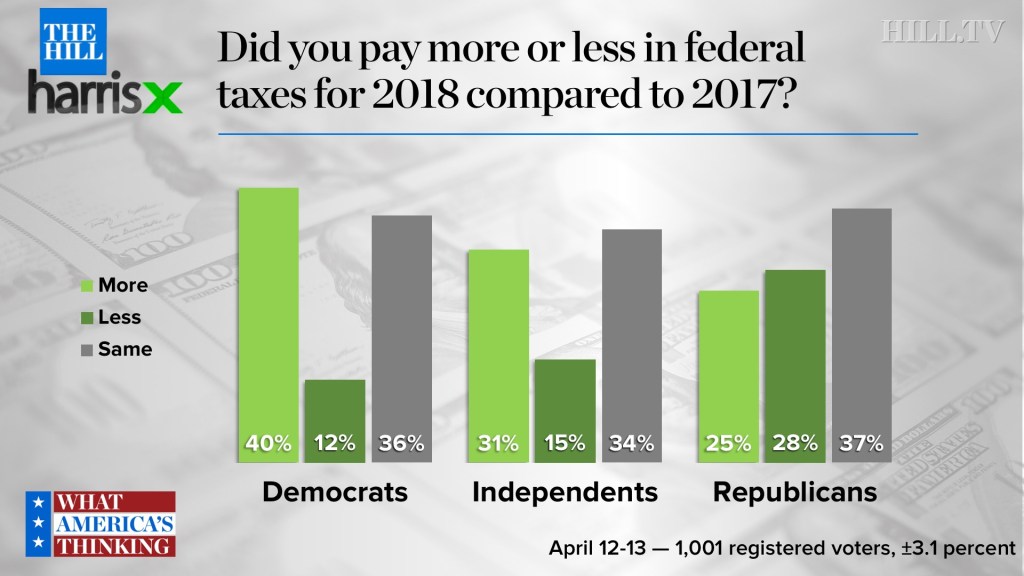 The overall reduction for most individuals was not very much, the think tank found in a separate analysis with 90 percent of taxpayers seeing a their taxes going down by less than 2 percent of their household incomes.

“The reality is for most people, the tax bill doesn’t make much of a difference. Some people will have seen quite a small tax cut but it will have been folded into their pay checks so it’s no surprise that people aren’t completely clear on what happened,” Vanessa Williamson, a senior fellow at the Tax Policy Center, told “What America’s Thinking” host Jamal Simmons.

The Tax Cuts and Jobs Act did lower federal rates on corporations from 35 percent to 21 percent, a provision that was popular among large-dollar GOP donors.

But Republican voters in the Hill-HarrisX survey were most likely to say their federal tax liabilities had stayed the same compared to 2017.

Trump on Monday will tout the tax cuts and the economy at an event in Minnesota. Republicans have sought to highlight the law’s cuts for the middle class, while Democrats have argued that the bulk of the law’s benefits go to corporations and wealthier taxpayers.

The latest Hill-HarrisX survey was conducted April 12 and 13 among 1,001 registered voters. It has a sampling margin of error of 3.1 percentage points and a confidence level of 95 percent.

15 hours ago
The Debrief
4 days ago