84 percent in new survey say marijuana use should be legal

Under U.S. law, marijuana is listed as a controlled substance subject to licensing but in recent years, enforcement of the official policy has been sporadic. Cannabis is legal for recreational use in 10 states, only for medical purposes in 23, and completely illegal in 17. 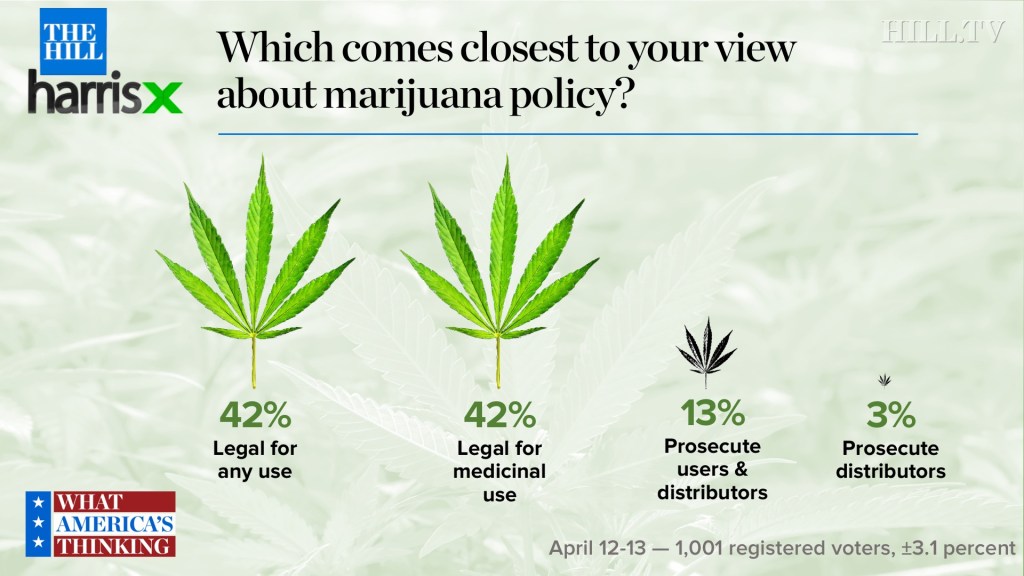 Marijuana decriminalization is an example of public opinion being ahead of political elite opinion, Henry Olsen, a senior fellow at the Ethics and Public Policy, said Tuesday on “What America’s Thinking.”

“The younger you are, the more likely you are to favor it and it’s just a matter of time before public opinion finally works its way and marijuana use is generally legalized,” Olsen told host Jamal Simmons. “In this case, the laws are well behind public opinion.”

Among women, 46 percent of voters favored legalizing marijuana for medicinal use while 37 percent said it should be available for any purpose. Men were more inclined toward favoring pot for any use with 47 percent favoring complete legalization and 37 percent supporting it only for medical treatments.

White respondents overwhelmingly supported pot legalization with 84 percent favoring it and only 17 percent opposing it. Similar margins were observed among black voters (89-12), and Hispanics (90-9).

Across all age groups, the vast majority backed decriminalization. Elderly voters were the most supportive of legalization with only 11 percent of respondents 65 years old and up wanting criminal penalties for selling or using marijuana. The majority, 56 percent, favored legalization for medicinal purposes while 33 percent favored broad legalization.

Voters between 35 and 49 were the most supportive of allowing people to use marijuana for any purpose. Fifty percent of this age group had this view while 33 percent favored pot for medical treatment. Only 17 percent wanted it criminalized in some fashion.

Among respondents between 50 and 64, just 14 percent said they wanted marijuana use or sales to be illegal while 45 percent said weed should be legal for medical purposes; 41 percent said pot should be available for any use.

The plurality of younger voters (43 percent), those between 18 and 34 years of age, said they wanted marijuana to be legal for any purpose. Thirty-five percent said it should be legal only for medical treatment while 23 percent favored criminalization of some sort. 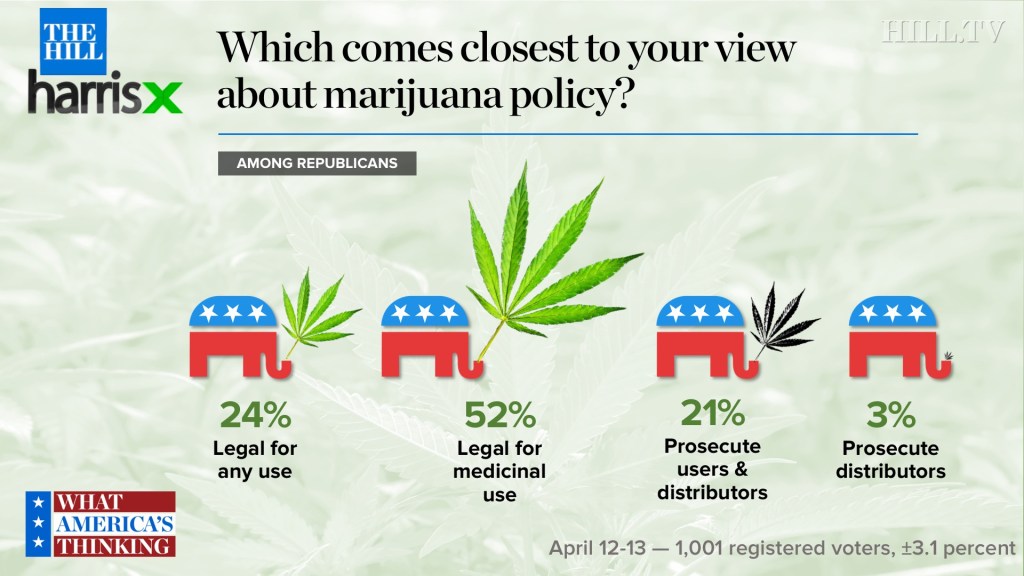 Self-identified independents backed legalization strongly with 45 percent favoring allowing pot to be used for any purpose and 38 percent saying it should be available only for medical use. Thirteen percent said marijuana use and distribution should be illegal while 3 percent said that only distributors should face prosecution.