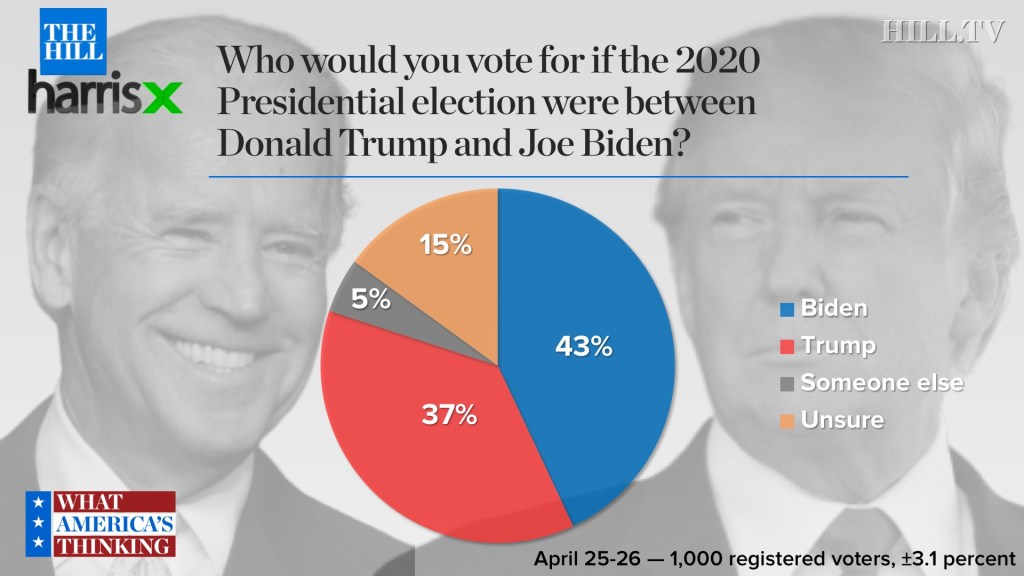 Biden’s 6-point lead was outside the poll’s 3.1 percent sampling margin of error.

The former vice president has been consistently competitive with Trump in public opinion surveys for several months before he officially declared his intention to become the Democratic Party’s nominee.

In the survey, Trump had his strongest support among older voters. He led the former vice president by a slim 43 to 42 percent margin among voters over the age of 50.

The former vice president also led Trump among respondents between the ages of 18 and 34 but his lead was much smaller since many more voters in this age group said they did not know which candidate they would pick.

In a Hill-HarrisX survey conducted earlier this month, Biden was judged by voters of all stripes as having the greatest chance of ousting the GOP from the White House. Seventy-five percent of Democratic registered voters said he had at least “some chance” of beating Trump while 64 percent said the same about the odds of Sen. Bernie Sanders (I-Vt.).

Biden and Sanders were the only two Democratic hopefuls that a majority of party loyalists said had at least some chance of winning. 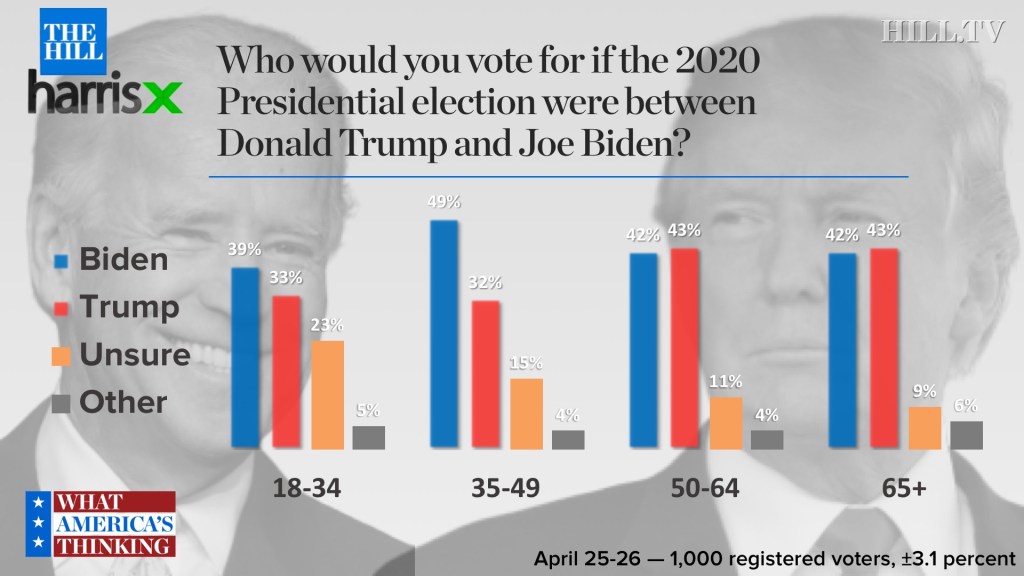 “What Joe Biden offers in this campaign is normalcy, something people are desperate for after now three years of Donald Trump,” Schneider told host Jamal Simmons. “They want a normal president. They want a president who knows how to do things, who has long experience, and knows how the government works, which Trump does not.”

The former vice president earned endorsements of several Democratic senators within his first week of campaigning but he was also was attacked by Justice Democrats, a progressive political action committee.

“Joe Biden stands in near complete opposition to where the center of energy is in the Democratic Party today. Democrats are increasingly uniting around progressive populist policies like Medicare for All, a Green New Deal, free college, rejecting corporate money and ending mass incarceration and deportation,” Alexandra Rojas, the group’s executive director, said in a statement.

On Thursday, Politico reported that Trump has been quietly expressing concern about his ability to defeat Biden even as he was publicly deriding the former vice president as “Sleepy Joe” on Twitter.