An overwhelming majority of Americans oppose the idea of granting voting rights to citizens younger than 18, according to a Hill-HarrisX poll released on Thursday. 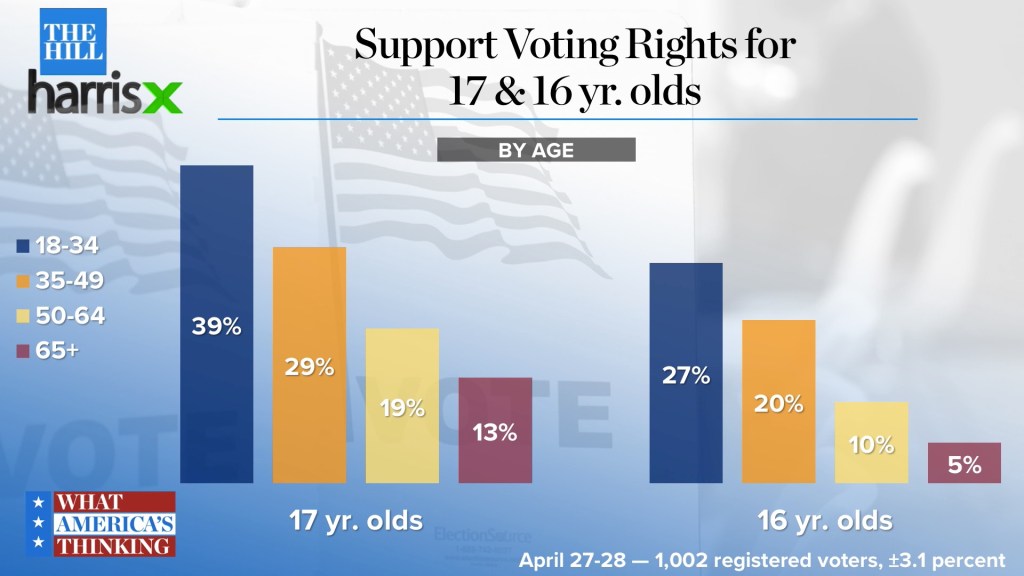 Every age group in the poll was against lowering the voting age to 16 or 17, though younger respondents were more supportive than older participants.

Thirty-nine percent of respondents under the age of 35 were in favor of allowing 17-year-olds to vote, compared with 13 percent of those 65 and older who felt the same way.

Twenty-seven percent of respondents between 18 and 34 supported granting voting rights to 16-year-olds, while only 5 percent of those 65 and older agreed.

The survey also found that Republicans were more likely than Democrats to be opposed to voting rights for people younger than 18.

Eighty-eight percent of GOP respondents said that 17-year-olds should not be allowed to vote, and 89 percent opposed letting 16-year-olds vote.

Among Democrats, 65 percent said 17-year-olds should not be allowed to vote, with 78 percent saying the same about 16-year-olds.

Among independent voters, 74 percent said they opposed lowering the voting age by one year, while 26 supported the idea. Letting 16-year-olds participate in elections received even less support, with only 16 percent backing the proposal.

Lowering the voting age has been discussed recently after long-shot Democratic presidential hopeful Andrew Yang made decreasing the federal voting age to 16 one of his campaign positions, arguing that doing so would increase turnout, promote civic engagement and let young people have a say in their own future. Yang is the first presidential candidate to openly support the idea.

Rep. Ayanna Pressley (D-Mass.) introduced an amendment in March to lower to the voting age to 16. The measure garnered 126 votes, falling short of the majority needed to advance. But Speaker Nancy Pelosi (D-Calif.) voiced her support for the change.

The Hill-HarrisX survey was conducted online April 27-28 among a statistically representative panel of 1,002 voters. It has a 3.1 percentage point sampling margin of error and a 95 percent confidence level.

19 hours ago
Rising
2 days ago