Former Vice President Joe Biden has a 32-point lead in the Democratic presidential race in a Hill-HarrisX poll released Monday.

Biden won 46 percent in the poll compared to 14 percent for Sen. Bernie Sanders (I-Vt.), who came in a distant second place. 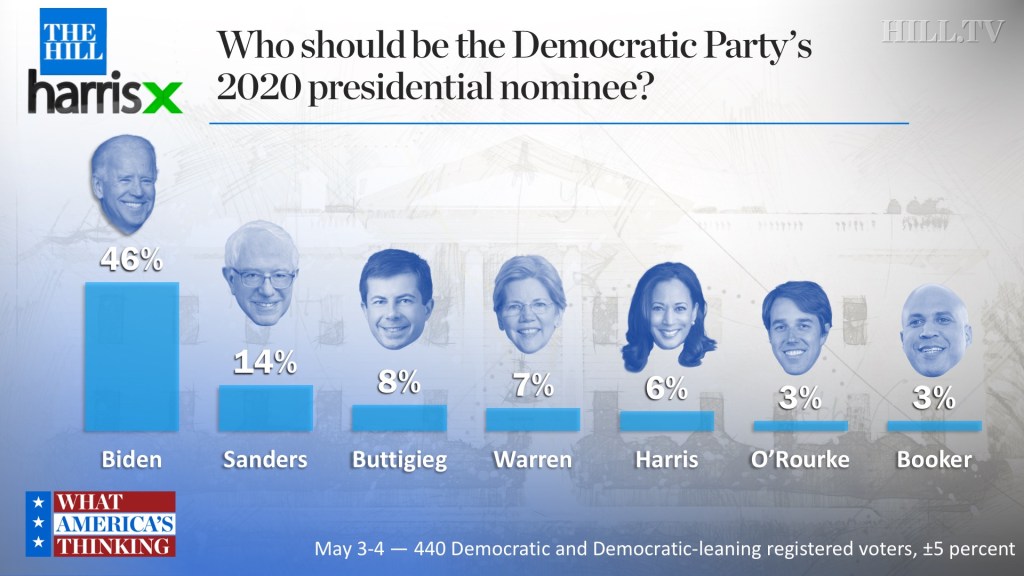 Since he officially entered the race in April, Biden has seen an increase in public support and become the clear frontrunner in the race.

Polls taken since the former vice president’s official declaration have shown him receiving support in the upper 30s to lower 40s, about twice as much as Sanders, his next closest rival.

The poll was taken Friday and Saturday among 440 registered voters who identified as Democrats or independents who leaned toward the party.

No respondents expressed support for Rep. Seth Moulton (D-Mass.) and former Sen. Mike Gravel (D-Alaska). Four percent of respondents named someone else. Respondents were not given an option to state that they were unsure or would not vote in a primary or caucus.

The vice president has strong name recognition and is likely being helped by his eight years as vice president to former President Obama, who remains popular with Democrats.

“Biden has seen a little bit of a bump from his announcement, anywhere from 12 to 15 percentage points in most polls that I’ve seen,” Mallory Newall, the director of research at Ipsos Public Affairs, said Monday on “What America’s Thinking.”

“I think his standing is strong at this point but again, you have to keep in mind that he is by far the best known in the race.”

Conor Maguire, a Republican strategist, suggested the race could still turn, noting that the 2016 Republican presidential primary was completely upended by the unexpected candidacy of Donald Trump.

“This is a long, long primary,” he told host Jamal Simmons. “At this point, Trump hadn’t even made his ride down the escalator yet, so there’s going to be a lot of things that are going to change and we’re going to see how they move.”

Biden’s numbers may also have been helped by the fact that the survey question did not give respondents an option to say they were unsure who they supported or that they did not intend to vote in the Democratic presidential primary.

The latest Hill-HarrisX poll was conducted from an online panel of 1,002 statistically representative registered voters with a sampling margin of error of 3.1 percentage points and a confidence level of 95 percent. The Democratic preference question was asked of a 440-person subset of voters who identified as Democrats or independents who were inclined toward the party. The sampling margin of error for the subset is 4.7 percentage points.

9 hours ago
Rising
21 hours ago