Former Vice President Joe Biden (D) is atop the field of Democratic presidential candidates in most polls, but a new survey finds that many of his supporters would be willing to back his top rival, Sen. Bernie Sanders (I-Vt.).

A Hill-HarrisX poll released Wednesday found that 27 percent of registered voters who support Biden said Sanders was their second pick to become the Democratic nominee. 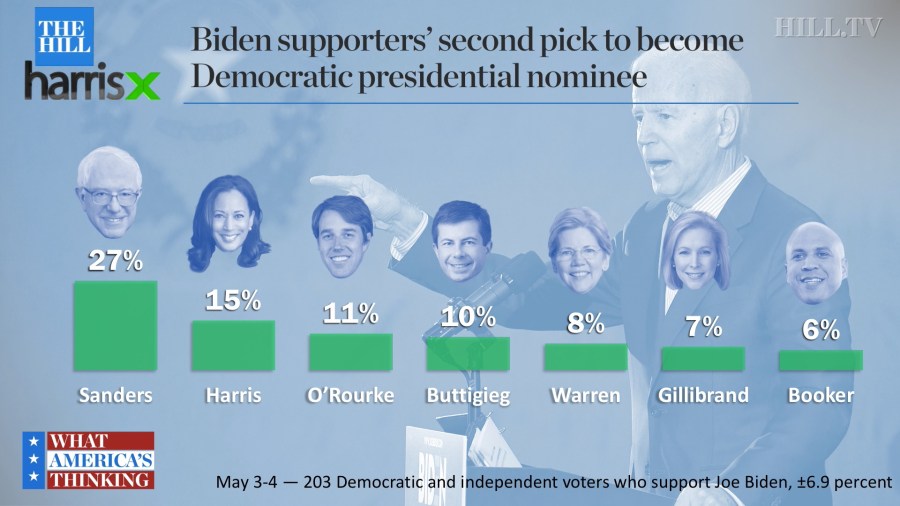 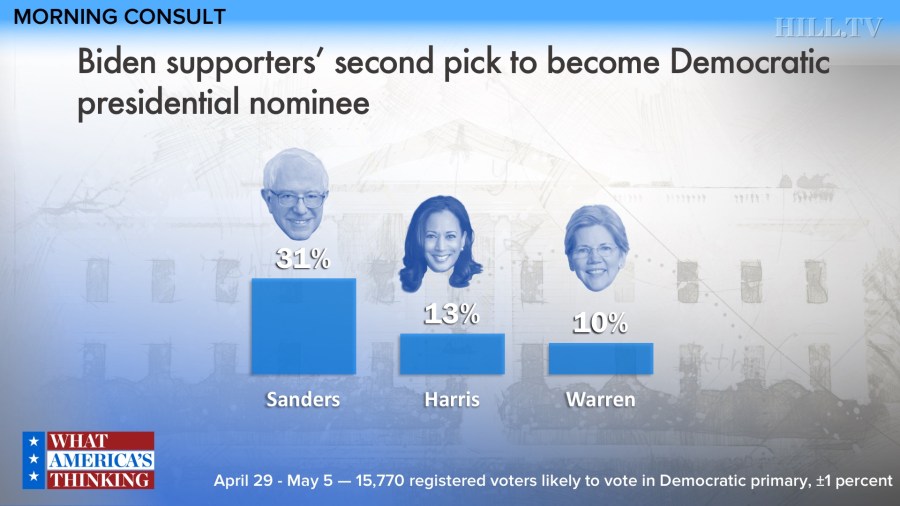 Other polls have seen similar results.

An April 29-May 5 survey of 15,770 likely Democratic primary voters conducted by Morning Consult found that 31 percent of Biden supporters said Sanders was their backup choice. Harris was named by 13 percent, followed by Warren’s 10 percent.

Before Biden entered the race, an April 12-15 poll from Change Research, a left-leaning group, found that Sanders gained 6 percentage points of support when the former vice president was excluded from the questionnaire seen by respondents. O’Rourke gained 5 points, while Buttigieg saw a 4-point increase.

An April 11-15 survey conducted by Monmouth University found that Sanders gained 7 points without Biden, with Harris and Warren each gaining 3 points.

The level of support among Biden backers for the further-left Sanders suggests Democratic voters don’t neatly align in discrete demographic or ideological “lanes,” Ruy Teixeira, a senior fellow at the Center for American Progress Action Fund, said Wednesday on Hill.TV’s “What America’s Thinking.”

“The whole business with lanes can be quite exaggerated, particularly if we’re thinking about the actual voters as opposed to the people analyzing the voters,” he told host Jamal Simmons. “They have a more broad, more disparate sense of preferences, and the electability thing sort of gets plugged in there for a lot of Democrats who are sick of Trump.”

To the extent that discrete groupings exist among dedicated party activists or large donors, the challenge for candidates seeking to dislodge Biden is to find a way to expand their appeal beyond their initial constituencies, Teixeira said.

“What you want to do is attract people across these so-called lanes,” he said. “That’s why Biden’s doing so well at this point: He’s taking people from all the lanes.”

But expanding their support base may prove difficult with more than 20 contenders in the race, Republican pollster Ed Goeas told Simmons.

“American voters like to choose between two candidates,” the veteran GOP strategist said.

“That is the one complicating factor you have now with Sanders and Biden both very high on name ID; they may be crowding out the second choice and certainly the data shows that’s what’s happening,” Goeas said.

The Hill-HarrisX survey was conducted May 3-4 among 440 Democratic and independent voters who leaned toward the Democratic Party. The survey has a 95 percent confidence level and a 4.7 percent sampling margin of error.

The second choice analysis is based on a subset of 203 respondents who said Biden was their first choice. The sampling margin of error for the subset is 6.9 percent.