More than half of registered voters believe that laws banning abortion after the sixth week of pregnancy are not too restrictive, according to a new Hill-HarrisX survey.

The May 10-11 poll found that 21 percent of registered voters said that such abortion bans are “too lenient” while 34 percent said they believe they are “just right.”

Forty-five percent of respondents said they believe the laws are “too restrictive.”

Proponents of abortion rights have mounted legal challenges to new regulations passed by a number of states, but the Hill-Harris poll shows that in the court of public opinion, the laws do not currently appear to have sparked majority opposition.

Following Brett Kavanaugh’s appointment to the U.S. Supreme Court, a number of Republican-controlled states have passed legislation aiming to reduce access to abortion, in the hopes of sparking a legal challenge that could lead to the high court reconsidering its landmark 1970 Roe v. Wade decision which legalized medical termination of pregnancies. 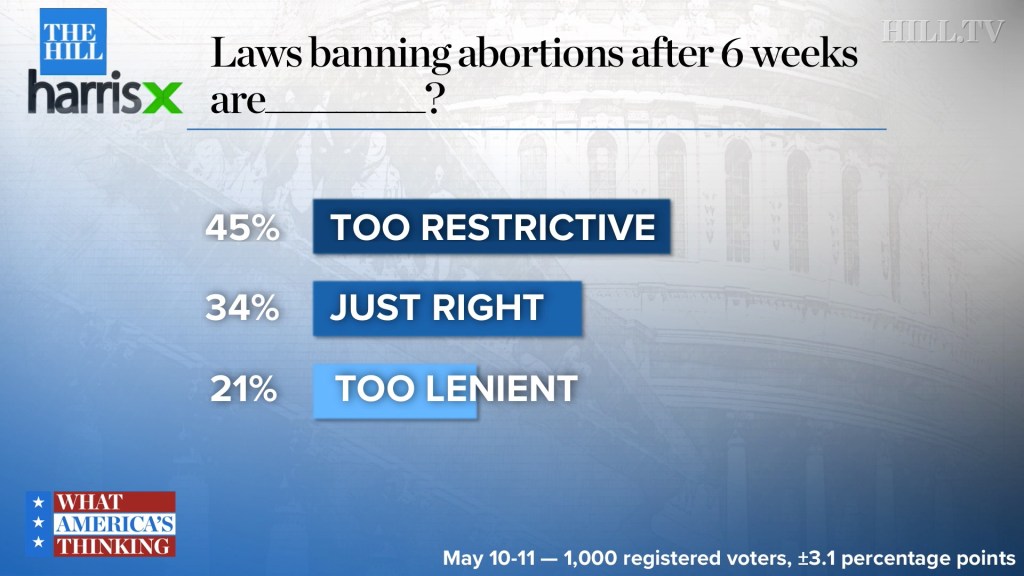 Opponents of the state laws — which ban abortion procedures after a fetal heartbeat can be detected — have argued that they place undue burdens on women, citing research that many do not know they are pregnant at six weeks of gestation.

The poll, notably, found comparatively little difference between women and men on the question.

Forty-three percent of male respondents said the laws, sometimes referred to as “heartbeat bills,” were too restrictive while 47 percent of women said the same. The margin of difference between the two sexes is not statistically significant.

There were stronger differences between age groups, however, with older respondents being much more likely to believe the new laws are too restrictive.

The youngest voters polled, those 34 and under, were most likely to say the abortion bans did not go far enough, although far less than a majority — 27 percent — said this. Forty-three percent said the laws were too restrictive while 30 percent said they were just right.

State governments in Arkansas, North Dakota and Iowa have passed laws banning abortions after fetal heartbeat detection that were overturned in courts before Kavanaugh’s nomination. Since the justice’s October 2018 appointment, several Republican-dominated states have passed abortion restrictions, including Mississippi, Ohio, Georgia, and Kentucky. Several more have legislation that has passed one or more chambers.

On Tuesday, Alabama’s state Senate passed a bill that would outlaw almost all abortion procedures, including for women who are victims of rape and incest.

Public opinion polling from multiple organizations has consistently shown that most Americans oppose overturning Roe v. Wade but do want to place some restrictions on when abortion should be allowed.

A May 2018 Gallup survey found that 60 percent of adults believe that abortion should be legal during the first three months of pregnancy, while only 28 percent believed it should be allowed in the second trimester. Only 13 percent believed that abortion should be permitted during the final trimester. Nonetheless, a majority of Americans wanted women to have access to abortion if their lives are threatened by giving birth.

Nonetheless, public opinion could change, Cox noted, since Democratic voters have become increasingly motivated on the issue of defending abortion rights. Increased pressure from Republicans to place significant restrictions on abortion (such as the Alabama law) could mobilize independents away from the GOP.

The Hill-HarrisX survey was conducted May 10-11 among a statistically representative online panel of 1,000 registered voters. It has a sampling margin of error of 3.1 percentage points and a confidence level of 95 percent.

9 hours ago
Rising
3 days ago