A majority of Democratic voters say they would rather back a candidate with the best chance of beating President Trump than one who agrees with them on their top policy issue, according to a new poll. 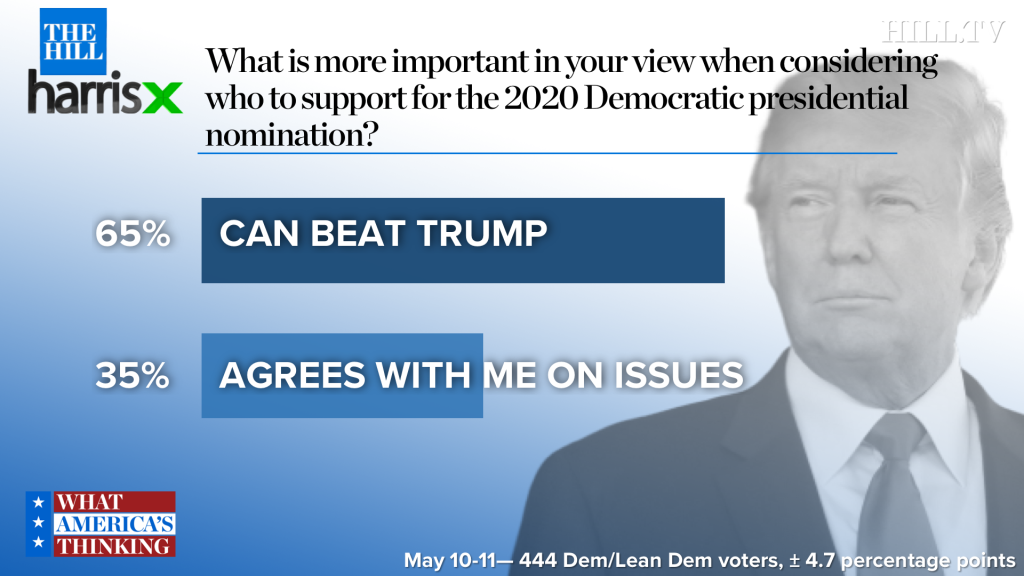 In a Hill-HarrisX survey released Friday, 65 percent of registered voters who identified as Democrats or independents who lean Democratic said it was more important to choose a primary nominee who has the best chance of defeating Trump. Thirty-five percent of the group said they preferred a candidate who agreed with their top issue.

There was wide agreement across demographic groups of Democrats and left-leaning independents, with 70 percent of women and 60 percent of men saying they prioritized winning back the presidency over any one issue.

Fifty-six percent of respondents between 35 and 49 said beating Trump was their top priority, with 58 percent of voters under the age of 35 saying the same.

The survey was conducted online May 10-11 among a representative sample of 1,000 registered voters with a confidence level of 95 percent and a sampling margin of error of 3.1 percentage points.

The question of issue priority was asked of 444 respondents who said they were Democrats or independents who typically voted for Democrats. The sampling margin of error of that subset is 4.7 percentage points.