The May 17-18 survey found Biden was the preferred pick to become president of 33 percent of registered voters who identified as Democrats or as independents who leaned toward the party. 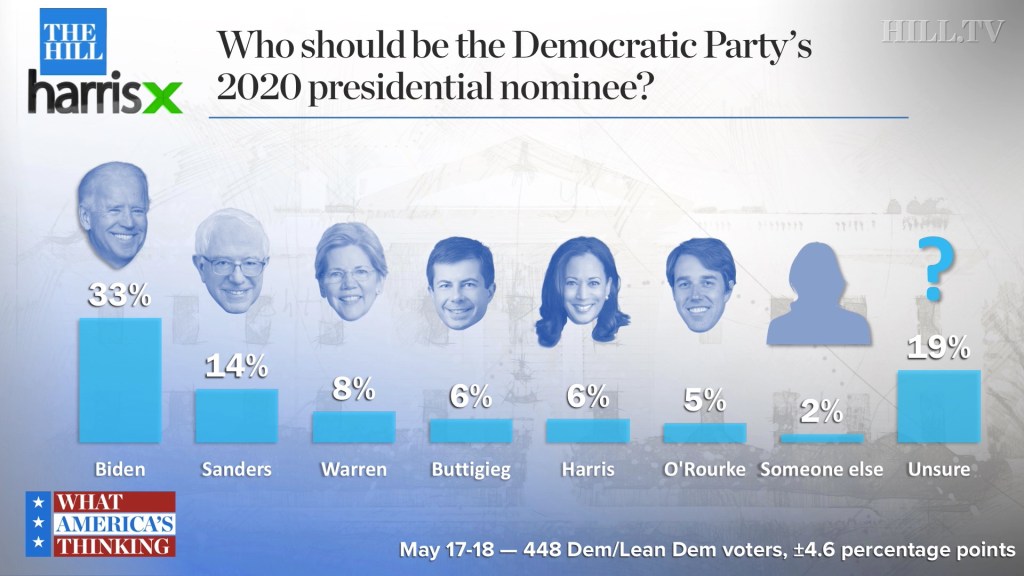 A large number of respondents, 19 percent, were undecided.

While she still trails the leading two candidates, Warren’s support has increased across several different polls in recent weeks but it has come at Sanders’ expense, Emma Vigeland, a correspondent with the progressive video network The Young Turks, told Hill.TV on Wednesday.

“Warren is rising and rightly so and she’s cutting into that Bernie Sanders chunk which I believe is substantial and not going anywhere,” she told “What America’s Thinking” host Jamal Simmons.

Sanders was the top choice for Democratic-leaning voters between the ages of 18 and 34 while Biden led among older age groups.

Nearly half of respondents (47 percent) who were 65 and older said the former veep was their choice. Biden was backed by 42 percent of participants between 50 and 64 and 35 percent of those between 35 and 49.

Among respondents who were 34 and younger, Sanders was the top pick of 24 percent. Thirteen percent chose Biden while 11 percent named Warren.

The former vice president fared better among respondents whose annual household income was $75,000 or greater than among those earning less than that amount.

Sanders was supported by 18 percent of Democratic-leaning voters with incomes less than $75,000 while only 8 percent of those earning more than this amount supported him.

The former vice president was the overwhelming favorite among respondents who classified themselves as “moderate” ideologically with 43 percent backing him. No other candidate received double-digit support from this group.

Biden was also the top pick among respondents who described themselves as politically liberal but by a much closer margin. Of the 221 participants who said they were either “strong” or “lean” liberals, the former veep was named by 28 percent while 17 percent named Sanders and 13 percent chose Warren.

Those findings echo earlier polls which indicate that Democratic voters place a much greater priority on defeating President Trump in 2020 than on ideological agreement. A May 10-11 Hill-HarrisX survey found that 65 percent of Democrats or independents who leaned toward the party said they would pick a candidate they believed had a stronger chance of winning the general election over one who agreed with them on their top policy issue.

A March USA Today-Suffolk University poll had similar findings, as did an April survey commissioned by a Pennsylvania newspaper of registered Democrats living in the state.

The latest Hill-HarrisX survey was conducted May 17-18 among a statistically representative online panel of 1,030 registered voters with a 95 percent confidence level and a sampling margin of error of 3.1 percentage points. The 2020 Democratic presidential preference question was asked of a subset of 448 respondents who identified as Democrats or as independents who favored the Democratic Party. The sampling margin of error for the subset is 4.6 percentage points.