A number of states are in the process of passing new laws to require public schools to offer Bible history classes but a new poll finds that the vast majority of Americans would prefer that other religious and atheist books also be included in such courses, or that they not be taught at all.

In a Hill-HarrisX survey released Friday, just 12 percent of Americans supported the idea of offering classes in Bible history that do not also teach about other religious books or atheist literature.

A third of respondents, 33 percent, said states should require schools to offer new history classes on all major religions, with a little over half of that group — 17 percent of the total sample — saying the class topics should also include the history of atheism.

Nineteen percent of survey participants said schools should not be allowed to teach students about any religious books, while 18 percent said that schools should be able to determine what courses to make available about religion or atheism.

Seventeen percent of respondents said they were unsure what their opinion on the matter was. 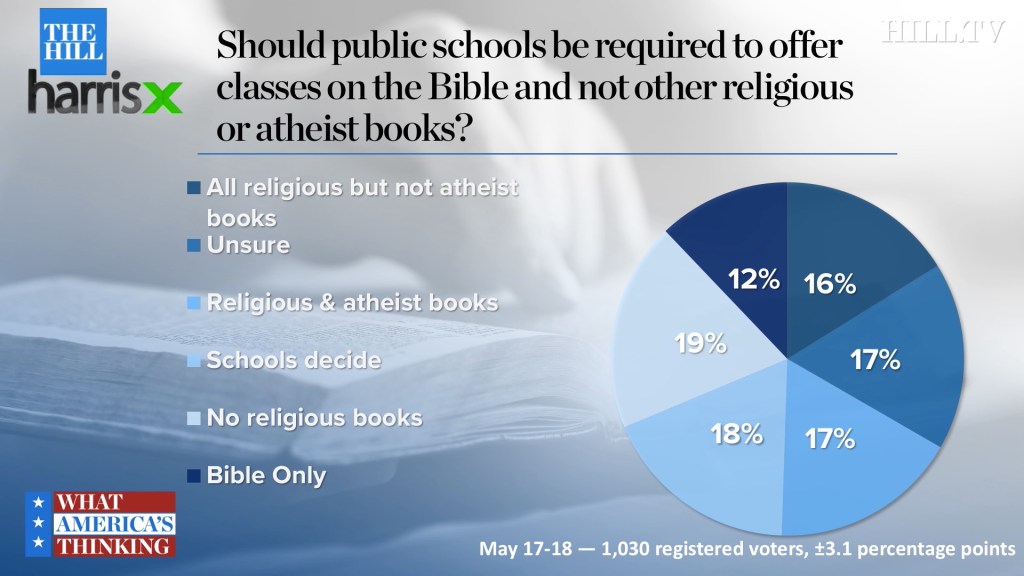 “Most of the time in polling, we don’t see ‘unsure’ answers close to 20 percent like it was in this particular poll,” Natalie Jackson, research director at the Public Religion Research Institute, told Hill.TV on Friday. “I just think there’s no real consensus right now on the type of policy.”

Legislation mandating that public schools offer optional classes about the Bible have been making their way through several states. In 2017, Kentucky became the first state to make a law requiring the classes.

Eleven states states currently have bills pending that would teach the Bible in schools but not allow for texts from atheists or other religions to be offered, according to an analysis by Americans United, a group that opposes them.

“I’m a Christian person and a religious person,” Indiana state Sen. Dennis Kruse (R) told the Indianapolis Star. “I think we need more Christianity and more religion in our society, in our state.”

Conservative legislators have been promoting the bills as part of a larger initiative called Project Blitz that is designed to spread Christian messages through public policy. In January, President Trump said he supported their efforts.

“Numerous states introducing Bible Literacy classes, giving students the option of studying the Bible. Starting to make a turn back? Great!” he wrote on Twitter.

The spate of legislation has been strongly denounced by secular and atheist groups.

“The goal of this campaign is to cement Christian supremacy into the law,” Nick Fish, president of American Atheists, told Hill.TV.

“Unfortunately, young people are often the targets of these attempts, whether it be in these ‘Bible literacy class’ laws, requirements that every school plaster ‘In God We Trust’ on the wall, or laws that exempt religious adoption and foster care providers from rules protecting LGBTQ or non-religious youth,” he said.

Jackson noted that most Americans are not aware of the Project Blitz initiative or efforts to promote Bible reading in schools, adding that the national press has not given much coverage to the state-based controversies.

“This is not getting a lot of attention,” she said.

While the Bible-only class efforts have been garnering support from high-level Republican policymakers, GOP voters in the Hill-HarrisX poll were not particularly keen on the idea.

Just 22 percent of respondents in the poll who identified as Republican said they wanted the Bible to be taught to the exclusion of texts written by atheists or those from different faiths.

Among Democratic and independent survey participants, just 6 percent of each group said that they approved of the idea of having schools teach the Bible only.

The survey was conducted May 17-18 from a statistically representative online panel of 1,030 voters. It has a 95 percent confidence level and a 3.1 percent sampling margin of error.