Despite the rise to prominence of openly socialist politicians like Sen. Bernie Sanders (I-Vt.) and Rep. Alexandria Ocasio-Cortez (D-NY), many Americans say they cannot define socialism, according to a new poll.

In a May 29-30 Hill-HarrisX survey of registered voters, 20 percent said they were unsure what socialism was.

The study also found that respondents gravitated toward both positive and negative definitions of the term much more than toward its academic meaning. Only 13 percent described socialism as government ownership of some parts of the economy. 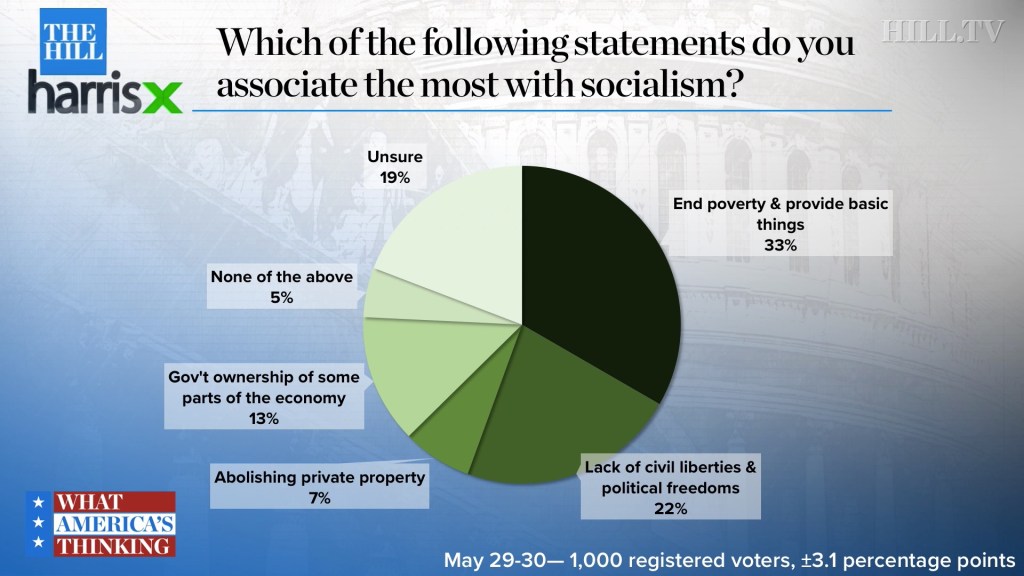 Twenty-eight percent said they believed socialism was fulfilling basic needs like healthcare, housing, and a job to everyone while another 5 percent believed it meant ending poverty.

Twenty-two percent said they viewed socialism as a system lacking in civil liberties and political freedoms while seven percent associated it with abolishing all private property.

There were some notable differences across age groups with younger respondents more likely to define socialism in positive ways.

Forty-four percent of voters 34 and younger said that socialism was about providing basic needs and ending poverty compared to only 27 percent of respondents who were 65 years old and up.

Younger Americans’ willingness to discuss socialism in positive terms is an outgrowth of recent public discontent with the economy that began after the 2008 financial crisis, Mohamed Younis, editor in chief at Gallup, told Hill.TV.

“One way to look at it is, yeah, young people are more open to that [socialist] approach but when you look at what they mean by it, it gets right back to basic equity and opportunity for all—and a perception that some folks don’t have that opportunity.”

There were strong educational differences, however, with voters who had not earned a college degree being much more uncertain about socialism. Only 8 percent of respondents who had a bachelor’s degree or higher said they did not know what socialism was compared to 25 percent of non-degree holders.

The study also found greater uncertainty about defining socialism among racial minority groups with 27 percent of black voters saying they did were unsure of what socialism was and 22 percent of Hispanics being uncertain. By contrast, only 18 percent of white respondents were unsure.

The large amount of public uncertainty about what socialism is may decline over the 2020 presidential campaign since Sanders is one of the leading candidates on the Democratic side and President Trump has made attacking socialism one of his core re-election messages.

Other Democratic candidates and office-holders have discussed socialism in recent years as well. Speaker of the House Nancy Pelosi (D-Calif.) has repeated proclaimed that her party is capitalist and that socialist critics need to “deal with it.”

A Gallup poll released last week found that 43 percent of American adults believed that some form of socialism would be a “good thing” for the country while 51 percent said they thought it would be a “bad thing.” Six percent said they had no opinion, a large decline from a survey conducted in 1942 which Gallup reported had 34 percent of respondents saying they were unsure.

The crucial battle for 2020 between the two parties about socialism will be for independent voters. In the Hill-HarrisX survey, 46 percent of GOP respondents used negative terms to describe socialism while 19 percent focused on more positive aspects. Democrats were the reverse with 51 percent using positive definitions and 11 percent using negative ones. Independents were evenly split with 31 percent saying socialism is ending private property and limiting civil liberties and 28 percent defining it as providing basic needs and ending poverty.

3 hours ago
Rising
3 days ago