Former vice president Joe Biden leads Sen. Bernie Sanders in the latest Hill-HarrisX poll released Monday by 19 points, maintaining a clear separation from the rest of the field in the Democratic presidential primary,

South Bend, Ind. Mayor Pete Buttigieg was a distant third with 8 percent. He was followed by Sen. Elizabeth Warren (D-Mass) at 5 percent. 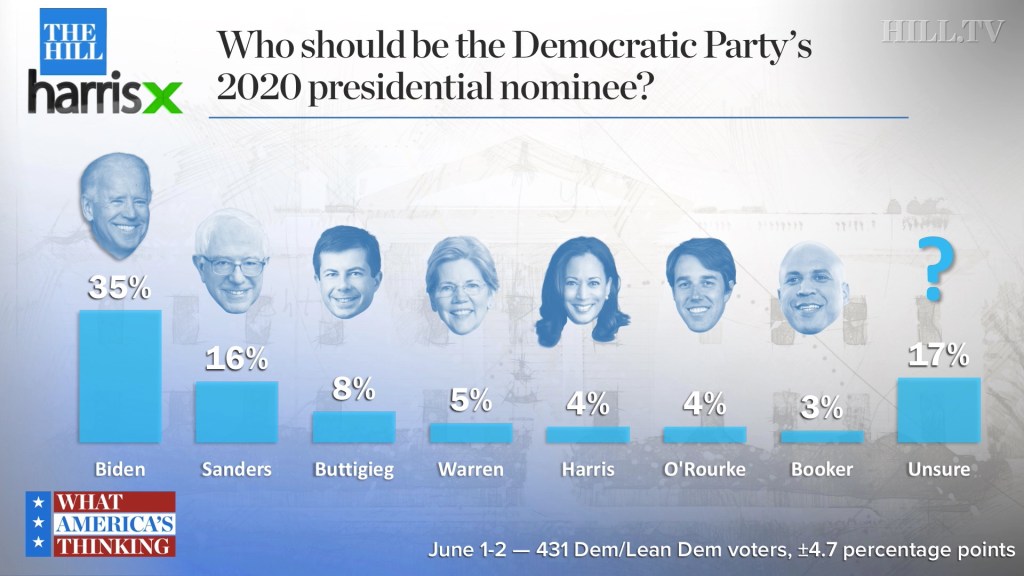 All of the other Democratic candidates were named by 1 percent or fewer survey participants. Seventeen percent of respondents said they were unsure about their preference.

The results overall are largely similar to a May 17-18 Hill-HarrisX survey which also found Biden with a 19 percent lead over his Vermont-based rival. The former vice president received 33 percent support in the earlier poll while Sanders received 14 percent.

The May survey showed Warren in third place with 8 percent support and Buttigieg in fourth with 6 percent. The shift between the two candidates’ support within the polls is within the surveys’ sampling margins of error.

The newer poll found Biden as the top named candidate of both men and women and also across all age groups, although his lead over Sanders among voters between 18 and 34 was just one point, indicating a statistical tie. Older voters were overwhelmingly more likely to prefer the former vice president to other candidates with 47 percent of respondents 50 years old and older supporting him.

Among white voters, Biden was the preferred candidate while Sanders and Buttigieg were essentially tied for second-place. Biden enjoyed an even stronger lead among black respondents while Sanders showed strength among Hispanics although the sample size for both groups is too small to state this definitively.

Since Biden’s entry into the presidential contest in April, the race has become relatively stable with no candidate able to dislodge Sanders from second-place and Biden from first, although that may change following the first debate contest which will be hosted by the Democratic National Committee June 26 and 27.

Presidential aspirants sharpened their messages over the weekend at the California Democratic Party’s annual convention in San Francisco where several candidates called for impeaching President Trump. Former Colorado Gov. John Hickenlooper was booed by attendees after he expressed skepticism about a proposed Green New Deal environmental initiative and proposals to have the federal government administer medical insurance for all Americans.

Warren and Buttigieg took veiled swipes at Biden at the event with the Massachusetts senator implicitly denouncing his recent declarations that Republicans would become more inclined toward bipartisanship if President Trump is defeated in 2020. Buttigieg said that Democrats needed “a new generation of leaders,” a reference to Biden’s age of 76 years.

Sanders indirectly slammed Biden for skipping the event and argued that the party would not be able to defeat Trump unless it embraced a progressive agenda.

The latest Hill-HarrisX survey was conducted June 1-2 among a statistically representative sample of 1,001 registered voters. The question about 2020 Democratic presidential preference was asked of a subset of 431 respondents who said they were Democrats or independents who leaned toward the Democratic Party.

16 hours ago
The Debrief
4 days ago