Republican voters, who have traditionally been perceived as favoring reduced government spending, are not keen on cutting federal spending that supports specific areas like health care and disaster relief, according to a new poll.

In a Hill-HarrisX survey of registered voters, majorities of GOP respondents said they did not support reducing federal spending in all 19 budget areas listed, from foreign aid and unemployment relief to infrastructure and education. 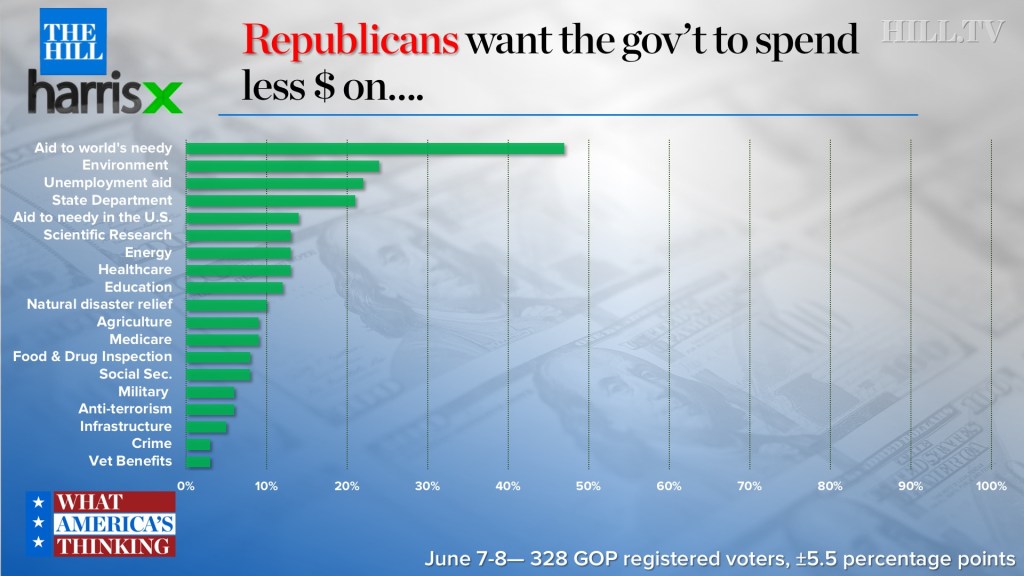 Cutting spending for unemployment aid and the State Department were the next-most popular areas to reduce spending among GOP voters. Twenty-two and 21 percent of them respectively, wanted spending reductions in those areas.

The Hill-HarrisX survey was conducted June 7-8 among a statistically representative online panel of 1,001 registered voters. It has a sampling margin of error of 3.1 percentage points.

Among voters who identified as independents, reducing aid to the world’s needy was the most popular, with support from 35 percent of the group. Cutting funds to the State Department was supported by 27 percent of independents.

The Hill-HarrisX findings parallel recent surveys from the Pew Research Center which found little public support across partisan lines for reducing government spending. A study published in April by Pew found that Republican and Democratic support for more federal spending has increased since it polled on the topic in 2013.

Some GOP officials say Washington lacks the political will to make significant cuts to federal spending.

“There is no center of gravity to reduce spending in this town, period, end of story,” acting White House chief of staff Mick Mulvney, who was a staunch supporter of spending reduction measures as a House lawmaker, said Tuesday at conference about the national debt, sponsored by the Peter G. Peterson Foundation.

14 hours ago
Rising
2 days ago

4 days ago
The Debrief
7 days ago