American voters do not want private companies to be allowed to compile and sell data about people without permission, a new poll shows.

In a Hill-HarrisX survey of 1,000 registered voters, only 7 percent expressed support for the current U.S. privacy system which allows companies to sell adults’ personal data without permission or compensation to those affected.

Thirty-six percent said that there was no circumstance where they believed companies should be allowed to compile and sell user or customer data.

Another 36 percent said they thought companies should be allowed to compile and sell private information but only with compensation to the people whose data was collected and sold. 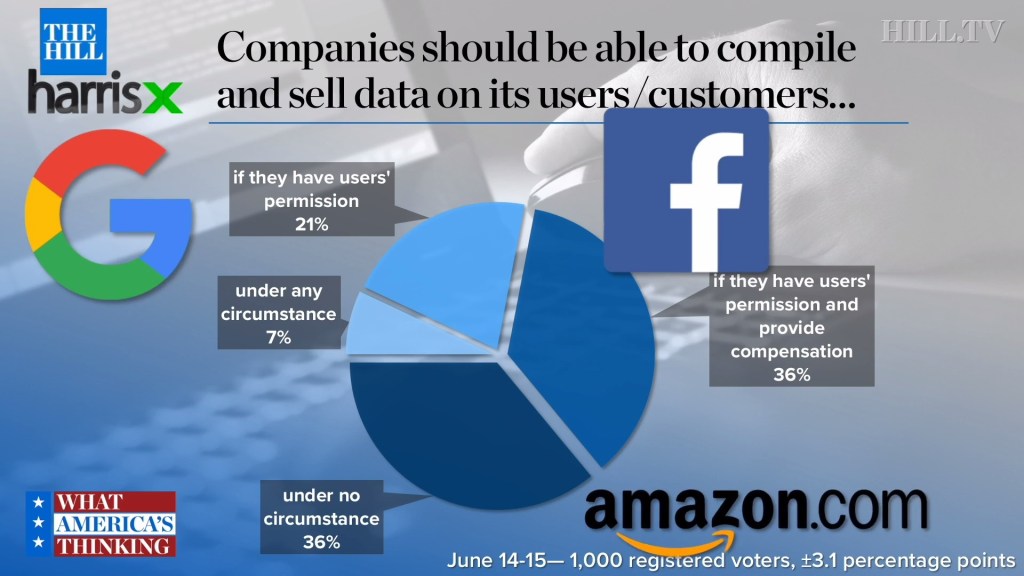 Twenty-one percent said that companies should be allowed to compile and sell data if they had permission and that the businesses did not have to compensate their customers/users.

Many large companies, particularly Google and Facebook, have developed business models that are dependent on tracking individuals who use their services across the internet and elsewhere.

Sen. Elizabeth Warren (D-Mass.) has made attacking technology companies’ data practices a cornerstone of her 2020 presidential campaign. In March, she publicly called for breaking up Google, Facebook, and Amazon, comparing them to historic monopoly companies like Standard oil. Last month, she unveiled a bill that would fine credit agencies $100 for each person whose data is stolen in a security breach.

Other Democratic presidential candidates have expressed support for increased regulations on data use with some calling for a U.S.-equivalent of Europe’s General Data Protection Regulation.

On Monday, the Washington Post reported that the Federal Trade Commission has been investigating Google’s YouTube division for tracking child users, a practice allegedly in violation of a 1998 law which forbids tracking and targeting children under 13 years of age.

About the same number of Democrats and Republicans said that companies should not be able to sell data under any circumstance. Thirty-three percent of GOP respondents took this position, as did 35 percent of Democrats. Forty percent of independents agreed.

Younger voters were more willing to allow companies to sell consumer data than older ones although it was still a minority position. Fourteen percent of respondents who were between 18 and 34 said they supported letting companies compile and sell personal data without permission while only 2 percent of those 65 and above agreed.