Size of 2020 field too big even for Democratic enthusiasts, poll finds

Democrats are fielding too many candidates in their attempt to defeat President Trump next year, according to 72 percent of party supporters in a new poll.

A Hill-HarrisX survey released Friday found that almost three-fourths of registered voters who identified as Democrats or independents who lean Democratic said there are “too many” party candidates running for president. Sixteen percent said the number of Democratic candidates was about right, and 12 percent said there were not enough White House hopefuls vying for the nomination.

More than 70 percent of men and women in that group of respondents said there were too many candidates, though differences emerged among age and racial groups. 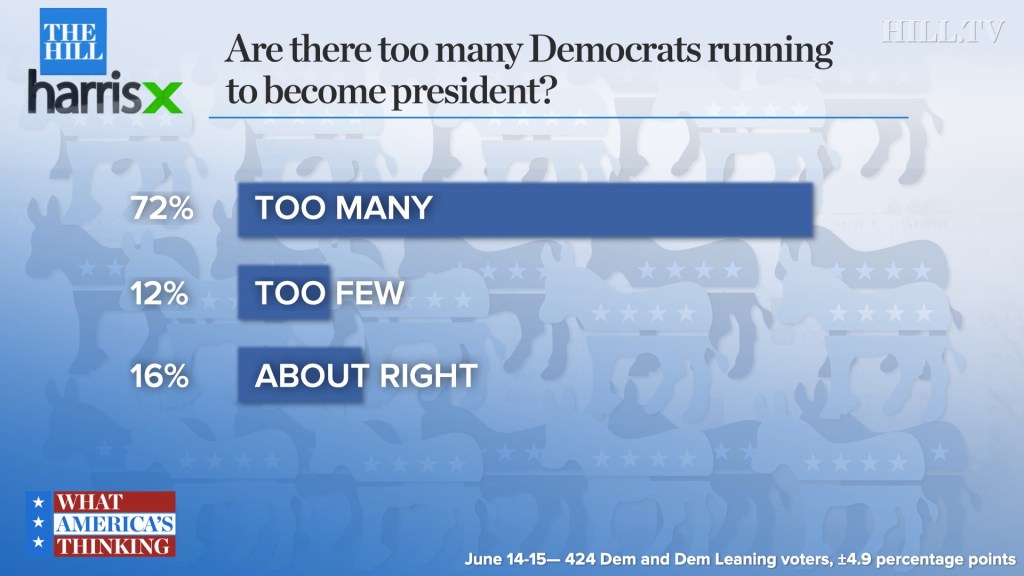 While majorities of respondents across all age groups said they wanted fewer candidates, younger voters were somewhat less likely to agree. Eight-eight percent of voters age 50 or older thought there were too many White House contenders, compared with 62 percent of younger voters who agreed.

Eighty-four percent of white respondents also said there were too many candidates, while 58 percent of Hispanic and black voters said the same.

Seventy-seven percent of Democratic-leaning voters who identified as strongly or somewhat liberal said there were too many candidates while 68 percent of respondents who said they were moderate or conservative agreed.

The Hill-HarrisX findings are similar to a June 2-5 Selzer & Co. poll of likely Iowa caucus voters commissioned by the Des Moines Register and CNN which found that 79 percent of respondents wanted at least some of the Democratic presidential candidates to drop out of the race.

Twenty candidates are set to appear in the first debate, which will be held Wednesday and Thursday and broadcast on MSNBC, Telemundo and NBC.

Although the Democratic field is historically large, many political observers have predicted that several contenders will drop out ahead of the third debate on Sept. 12, which will feature higher thresholds for eligibility.

The Democratic National Committee announced in May that candidates participating in the third forum must receive at least 2 percent support in at least four approved polls and have at least 130,000 individual donors and 400 unique donors per state in at least 20 states.

Some party leaders have begun urging lower-polling candidates to abandon their presidential ambitions and run for Senate seats in their home states.

“The clock is running out for people who have not demonstrated any ability to mount a serious presidential bid to help make a real difference in their country by helping to turn the Senate,” Sen. Sheldon Whitehouse (D-R.I.), told The Hill earlier this month.

The Hill-HarrisX poll was conducted online June 14-15 among 1,000 registered voters and has a sampling margin of error of plus or minus 3.1 percentage points. The subset of Democratic and Democratic-leaning respondents consisted of 424 respondents.